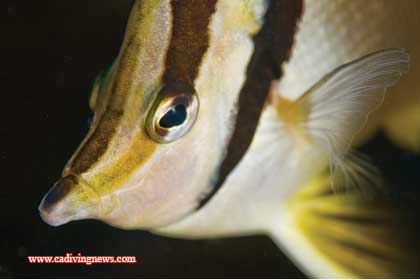 Those with patience and good eyesight are frequently rewarded with glimpses of exceptional beauty. California has many tiny invertebrates and fishes that are difficult to find, even though they are brightly colored and quite common. The yellowfin fringehead may be one of the cutest and hardest to find little fish a California diver will ever encounter.

Yellowfin fringeheads have three pairs of massive, multi-branched cirri between and above their eyes. Their “Marty Feldman eyes” can be used to distinguish them from other native fringeheads including the sarcastic fringehead. They may grow to a maximum size of four inches, but are commonly seen around two inches. Fringeheads may be uniform or mottled colored, and may be found in shades of red, orange, brown, olive or gray. They have one dorsal fin that runs most of the length of their body.
Yellowfin fringeheads are found from Monterey to Central Baja and are relatively common within this range. They are mostly found on rocky reefs and outcroppings. There are many individuals in the shale beds off the Monterey Harbor, particularly at Shale Island (CDN March 2010).
Biologists have named the yellowfin fringehead “Neoclinus stephensae,” meaning Stephen’s new clinus after its discoverer, Dr. Steven Blanchard. Fringeheads belong to the blenny family called Chaenopsidae and this family includes the pike-blennies, tube-blennies and flagblennies. All of these are Actinopterygii, the ray-finned fishes, having bony spines that support their thin fins, and all are Perciformes (perch like), a large order containing about 40 percent of all bony fish. The Chaenopsidae includes 14 genera and 90 species, most of which reside in the tropical Pacific. There are four species of blennies commonly found in California waters, including the yellowfin and sarcastic fringeheads.
Chaenopsids have compressed bodies and some are so elongated as to appear eel-like; all are scaleless and lack lateral lines. Their heads are rough and may be armed with spines. Many species in this family are called “tube-blennies” due to their attraction to abandoned worm tubes, but they will also inhabit empty clamshells. In Monterey they are frequently found in abandoned boring clam holes.
Chaenopsids males will typically guard a particularly attractive hole, clam- shell, or worm tube and convince a female to lay her eggs there. The female splits shortly after the male fertilizes her eggs, leaving the male to guard the nest. For weeks the male gently fans the eggs, keeping oxygen-rich water flowing over them. After hatching the young fringeheads are pelagic for several months before they settle down on a reef and look for a suitable home. Fringeheads mostly feed on crustaceans.
Yellowfin fringeheads are particularly fearless, especially considering their size. They are almost always found peering out of their home, and most of us only get a glimpse of their heads. They may appear defiant or curious, depending on their mood, and they will remain at the entrance of their hole, unless harassed. This is perfect behavior for the fish watcher or photographer. It is entirely possible to position your macro lens and strobes within an inch or so of their heads and they will sit and pose. This is suitably gratifying since their heads may only be a half-inch or so across, and you do have to get very close to fill the frame.
Yellowfin fringeheads are particularly difficult to find since they are small. Normally, only their heads protrude from their hole, and their cirri tend to make them blend in to their backgrounds. The only way to find them is to get close to the reef, move slowly, and look carefully. Since they are reluctant to retreat into their home, they will give you a reasonable chance of spotting them. Those with good eyes and patience will be rewarded!