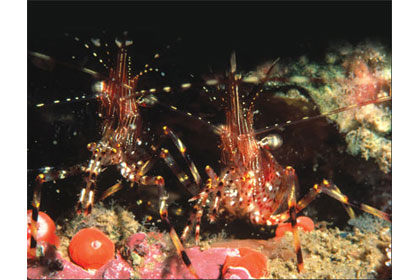 Who You Calling Shrimp?

Shrimp belong to the Phylum Arthropoda, which means jointed leg and includes 75 percent of all animals. They aren’t all aquatic. Spiders, scorpions, centipedes and millipedes are arthropods that live on land. Shrimp are members not only of the Subphylum Crustacea — which includes crabs, lobsters, barnacles, amphipods and isopods — but also of the Class Malacostraca.

This article discusses three so-called “shrimp.” Only one of them, however, is a true shrimp. Here’s a hint: The “shrimp” are: a Hyperiid (Order Amphipoda), a California longbeak (order Decapoda), and a California mantis shrimp (Order Stomatopoda).
The classification of malacostracans is, in part, based on the number of legs they have. According to Dr. Greg Jensen, “In the most basic design (seen in euphausiids or krill), there are eight pairs of legs. Amphipods have modified one pair into mouthparts, so seven pairs of legs remain.” Decapods have ten legs, three pairs of which have become mouthparts. Stomatopods have only three walking legs, the rest converted to feeding appendages.
So, which of the three creatures mentioned above is the real shrimp? It’s the decapod. Only creatures belonging to that order are true shrimp. The one in this article is officially known as the California longbeak, Pandalus gurneyi. It is one of 20 species in its genus and all of them live in the Northern Hemisphere. To the untrained eye (mine for instance), many of them look so much alike they are hard to tell apart.
At a maximum length of 3.3 inches, the longbeak is one of the smallest Pandalus found in California waters. The largest, the spot shrimp, can be almost 10 inches long. The longbeak is found in depths ranging from 54 to 380 feet and from Monterey to Baja. It resembles Pandalus danae so closely that for a time the two were thought to be just one species.
Stomatopods are represented here by the California mantis shrimp (Hemisquilla californiensis). A video by the late Mike deGruy, called The Fastest Claw in the West, opens with a mantis using its claw to shatter the glass of its aquarium. The video points out that the strike of a large mantis shrimp can hit with the impact of a 22-caliber bullet — which is pretty impressive, especially when you consider how small the mantis shrimp is! Mantis shrimp can break glass up to one-quarter inch thick and those who keep them as pets house them in acrylic aquariums.
Three of the mantis’ eight appendages are used for walking while the other five, including the special folding claws called raptorials, are used for feeding. Four of the approximately 350 species of these “shrimp” are found in SoCal waters. Since they live in burrows that can be more than six feet long, they prefer substrates such as mud or sand that are easier to dig in. When they want privacy, mantis shrimp will cover the opening of their burrows with shells and other debris.
The California mantis shrimp can be 12 inches long. Found from shallow water to depths of 295 feet, it ranges from Point Conception to Panama, including the Sea of Cortez. It is difficult to get photos of them out in the open because they are exceedingly fast moving. Shown here are only the head of the shrimp (the same mantis, photographed on two dives), easily identified because of its unusual stalked eyes. The shrimp was sitting in the opening of its burrow hoping something edible would happen by.
According to the www.dosits.org website: “The California mantis produces sounds by vibrating its carapace, similar to the American lobster. Although each animal produces its own distinct rumble sound, scientists have recorded multiple individuals in an area producing rumble sounds at the same time. Acoustic activity is also high during dawn and dusk, a time when the animals are feeding or guarding their burrows.”
The diet of stomatopods includes small crustaceans, snails, clams, sand dollars, heart urchins, brittle stars, worms and fish. Based on their claws, mantis shrimp are either smashers or spearers. The California mantis is a smasher, using its “elbows” to demolish the hard shells of its victims.
Amphipods range in size from about .039 to 13 inches and there are more than 9,500 species of them. The hyperiid amphipods discussed here are small pelagic crustaceans found in most oceans of the world. There are more than 150 amphipod families. Those in the Hyperiidae look pretty much alike. Without lab work there is no way to identify them, which is why I don’t have a name for the one shown here. If you think you’ve already seen the photo of it, you’re right; it appeared in my article on pelagic invertebrates in August. Since there wasn’t space then to discuss the amphipod sitting on one of the zooids (and the others seen inside them), the photo appears again this month.
Hyperiids have large eyes and live on salps and jellyfish. Since they are usually either parasitic or predatory, their presence is rarely beneficial to their hosts. Mature females brood their eggs until they are ready to hatch into juveniles. Juveniles molt six times before becoming sexually mature.
The seas are full of creatures whose common names have no scientific basis. Sea cucumbers, for instance, aren’t vegetables. There are many other examples, of which seahorses and starfish are my particular favorites. And now you know that a shrimp may be a shrimp in name only.
The author wishes to thank Gregory C. Jensen for his help in the preparation of this article. Dr. Jensen is the author of the comprehensive, educational and entertaining book, Crabs and Shrimp of the Pacific Coast.
Shrimp Stats
California longbeak (Pandalus gurneyi)
Phylum: Arthropoda Subphylum: Crustacea
Class: Malacostraca
Order: Decapoda
Infraorder: Caridea Family: Pandalidae
Mantis shrimp (Hemisquilla californiensis)
Phylum: Arthropoda
Subphylum: Crustacea
Class: Malacostraca
Order: Stomatopoda
Suborder: Unipeltata
Family: Hemisquillidae
Hyperiid Amphipod
Phylum: Arthropoda
Subphylum: Crustacea
Class: Malacostraca
Order: Amphipoda
Suborder: Hyperiidea
Family: Hyperiidae