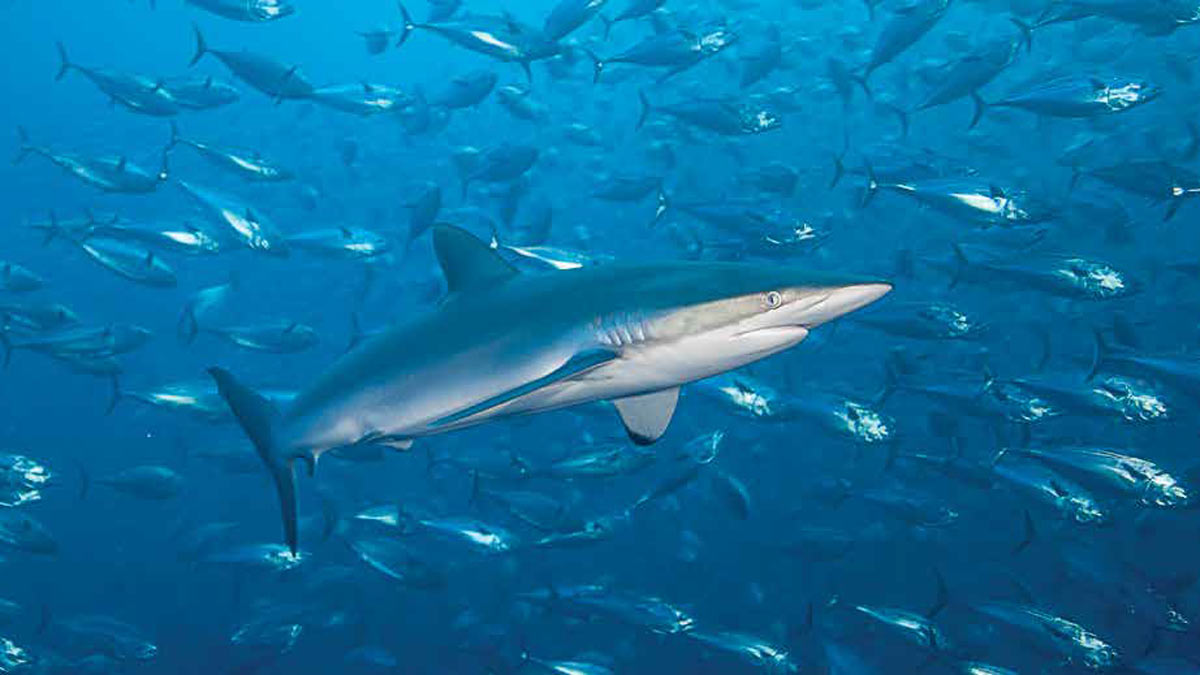 To my photographer’s eye, silky sharks are beautiful animals that bear strong resemblance to blue sharks. Their skin has a smooth, silky texture, their bodies are sleek but muscular looking, and often shimmer when illuminated by sunlight in water near the surface.

Like blue sharks, there are times when silkies are wary and other times when their sense of curiosity is stronger than their sense of caution. As with blues and many other sharks, silky sharks are often bold, fast to respond, and competitive when food is offered. Silkies are fast swimmers that often make darting movements when excited. Silky sharks are commonly seen by North American divers at popular destinations such as the Gulf of Mexico, southern end of Mexico’s Sea of Cortez and Revillagigedos archipelago, Costa Rica’s Cocos Island, and the northern sector of Ecuador’s Galapagos Islands.

FAMILY: Like blue sharks, silky sharks are requiem sharks, thus they are members of the family Carcharhinidae.

DESCRIPTION: The body of a silky shark is gray to almost black on the back and upper part of the sides and off-white on the lower sides, belly, and underside of the snout. The body lacks distinctive markings. The second dorsal fin is considerably smaller than the first dorsal fin, and the pectoral fins are long and narrow. The snout is elongated and more rounded than is the case with some sharks. The teeth in the upper jaw of a silky shark have a triangular shape, and they are relatively long and serrated. The teeth in the lower jaw are not as sharply serrated.

Silky sharks attain a maximum length of just over 11.5 feet with a more typical adult length of roughly 8 feet. The heaviest silky on record weighed 761 pounds.

RANGE: Silkies are widely distributed in almost all tropical and warm temperate seas in water that is warmer than 73 degrees F. Along with blue sharks and slightly heavier-bodied oceanic whitetip sharks, silkies are one of the world’s three most commonly encountered open ocean sharks.

HABITAT: Silky sharks generally inhabit the waters of the open sea, but they are commonly found near oceanic islands and large land masses. While divers know silky sharks to cruise in water at or near the surface, silkies have been documented in water as deep as 1,640 feet.

FUN FACTS: Silky sharks are viviparous, meaning they bear live young with litter sizes typically ranging from 1 to 16 young, and they live as long as 25 years in the wild. Silkies sometimes gather in aggregations that are separated by sex with juveniles tending to be found closer to shore. A variety of small fishes, pelagic crabs, and squids comprise the majority of their diet. Silky sharks often associate with schools of mackerels, jacks, and tunas. Silkies sometimes hunt in groups causing schools of fish to gather tightly and the sharks “push” the schools toward the surface to pin them in and make the fish easier to catch.

Unlike blue sharks, silky sharks are targeted by fisheries for human consumption.