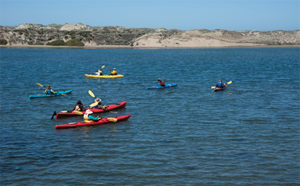 Sometimes the weather guy gets the predictions wrong, and when you get to a dive site the waves look like so many mountain ranges crashing on the beach. What’s a diver to do? One suggestion is to grab your kayak, or rent one, and paddle up Elkhorn Slough.

Elkhorn Slough is a huge estuary that begins at Moss Landing and extends inland about seven miles. It is the largest tract of tidal salt marsh in California outside of San Francisco Bay, and is home to a great many marine mammals, birds and fish. There is some disagreement about how the slough got its name. Some early reports refer to the shape of the slough resembling the antlers of a bull elk, while others refer to the huge herds of tule elk that once roamed the area.

The slough contains a fragile and important ecosystem. It is a breeding spot for marine mammals like harbor seals and sea otters, many fish including leopard sharks and bat rays, as well as numerous species of shore birds. Protection was first offered in 1971 when the Nature Conservancy bought up land along the shore. The California Department of Fish and Game later bought up 1000 acres in 1980. Today the waters are protected as a state marine reserve and conservation area, as well as a national estuarian research reserve.

I was first introduced to the slough during the early 1990s, to document and protest shark fishing derbies. Leopard sharks enter the bay during the late winter to give birth to live young in the protected waters of the slough. For many years bow and arrow hunters would compete for the largest and most sharks killed. Of course, this was not a catch-and-release event, and hunting animals in a nursery is never a good idea. Fortunately, public pressure and changing laws stopped the practice.

My favorite way to enjoy the slough is to park near the Monterey Bay Kayaks building and launch my kayak off the dock. I then paddle south and under the bridge that spans Highway 1, and head into the slough. Inexperienced kayakers should note that during times of large tidal swings there might be a fair amount of water movement through the narrow gap under the bridge. It is always best to check tide tables before venturing into the slough.

Harbor seals are predictably found along the north bank of the slough. They tend to hunt for fish at night and in the early morning hours, and are normally found napping or playing in the shallow waters along the bank. Harbor seals have their pups in the spring, and this is a good time to observe the interaction of moms and pups. At other times of the year they are found fast asleep on the beach. They have some curiosity of kayakers and will sometimes approach a kayak. They tend to try to sneak up on a paddler, and then dive when looked at.

You will find no better place to observe and photograph sea otters. Otters are found throughout the western part of the slough and in the harbor area. Mothers like to tend to their young in the protected waters here, and there are plenty of fat innkeeper worms and clams to dine on.

Otters tend to move around quite a bit and I have found they are not as curious of kayakers as harbor seals. One exception to this is during low tides they like to wrap themselves up in eel grass so they don’t have to swim against a changing tide. This is my favorite time to photograph otters, since they are very reluctant to leave their eel grass bed. Otters score very high marks for cuteness. Their faces are adorable and they spend a great deal of time grooming their rich fur, and that of their pups.

Please remember it is illegal to approach and disturb marine mammals. My suggestion is to hang out in the animal’s general vicinity and chill for some time, just observing and enjoying them. This allows time for the animal to be comfortable with your presence, and opens up opportunities for curious animals to approach you.

The slough is also a great place to photograph birds. Great blue herons, egrets, cormorants, and uncountable shorebirds nest and feed within the slough. While you are surrounded with all of critters above water, I advise keeping a close eye on the water under your kayak. You might see a leopard shark, bat ray, schools of baitfish, a diving bird or harbor seal pass within inches of your boat.

Elkhorn Slough can be quite crowded, particularly at midday on summer weekends. Should you like to have a more private experience I suggest launching your kayak after sunup during the week. Monterey Bay Kayaks opens at 9 AM, and it takes about an hour for renters to be trained and paddle to the main part of the slough. So, on most days you will share the experience with very few others from sunup to about 10 AM.

Skill Level: Anyone can kayak here.

Access: Boats and kayaks may be launched from the public ramps north of the bridge that spans Highway 1 at the entrance to the slough.

Entry and Exit: Kayaks may be launched off the beach next to the pier, and boats from the launch ramp.

Conditions: Normally quite calm, can get windy after 10 or 11 AM.