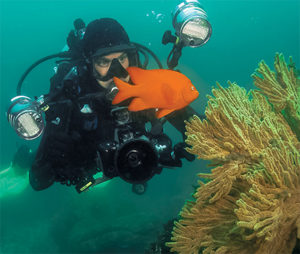 Talk with underwater photographers about shooting in California and it probably won’t take long before you hear some comments about how much more difficult it is to produce compelling photographs in our home waters than it is in clear tropical water. I am not going to refute this premise as nonsensical. But I will to say that with some forethought, practice and good shooting techniques it is possible to create strong macro and wide-angle images in California waters on a lot of days. The bottom line is that in California water ywwou need to employ the best shooting techniques to consistently create winning shots.

So let’s look at some specific problems we face in our home waters, and as we do, let’s examine some best practices that will help you deal with those obstacles.

Not many people will argue with that statement that as a general rule California’s water is colder and dirtier than warm, clear tropical water. Cold and dirty poses problems for photographers.

Let’s look at cold first. We don’t often see water temperature discussed as a factor that makes underwater photography more difficult. But colder water is a factor. Here’s why: In California most of us wear some type of gloves when we dive. No matter how much dexterity and warmth your gloves provide, I think it’s fair to say that by comparison we have more dexterity and a far better sense of touch in our hands and fingers in warmer water when we dive with thinner gloves or no gloves at all.

Wearing gloves makes it more challenging to feel and set camera system controls. In some instances it can be difficult to depress a specific button on a camera or camera housing. It can be quite a challenge, even impossible, to tell exactly which button you are depressing, and it can be problematic to grip and twist knobs on cameras, housings and strobes.

Two things can help you overcome the problems imposed by wearing gloves. One, spend some topside time making sure that you know which camera system buttons and control knobs perform which functions. Get so familiar with the location and function of specific controls that you can depress, grip and manipulate them with your eyes closed. Being able to “feel your way” around your camera system will help you avoid losing valuable time and getting frustrated as can happen when you manipulate the wrong control and can’t find the right one. I think most honest underwater photographers will tell you they have experienced this scenario, and it is maddening.

Being touch familiar with your camera system controls will also be a much appreciated skill when it is difficult to see the controls as is the case when the light level in the water is low and when things are happening fast.

Two, practice feeling your way around your camera system and actually manipulating various controls while wearing your gloves on land. You might even want to try putting your hands into some coldwater first. By doing this exercise and actually going through the required physical motions you can gain better insight into what it will be like to depress, grip and manipulate controls during a dive. Practice makes perfect, and simulating a dive can only help.

The next problem we face is that of comparatively “dirty” water in California. No question about it, there is more suspended particulate matter floating around in California water on an average day than there is in the clearer water of the Bahamas and Hawaii. Some photographers seem to accept as fact that dirtier water inevitably leads to unacceptable amounts of horribly distracting backscatter in our images. I can’t argue with the fact that the more suspended particulate matter there is in the water, the greater your chances to have some backscatter in your images. But if the visibility extends far enough for sport divers to enjoy a dive, there is generally no reason that you have to resign yourself to having unacceptable amounts of backscatter in every image you create.

A fundamental factor in preventing backscatter lies in strobe placement. First of all you want to use an off-board, or external, strobe instead of an onboard flash in comparatively dirty water. The terms off-board and external strobe refer to a flash that is not built-into the camera and that can be mounted onto a strobe arm and moved around as desired. The ability to accommodate an external strobe is a feature found in more sophisticated cameras as well as in some point-and-shoot cameras.

An on-board flash is built into the camera body, and is usually right next to the lens. And it is permanently fixed in place. This is the worst possible position for a strobe to be with regard to creating backscatter.

In most situations in our lives light comes from above us. It’s true of sunlight, lights in ceilings, streetlights and lamps etc. As a result, we are used to seeing shadows cast below our subjects even though we might not realize it.

Even on days when the visibility is off-the-scale excellent there is going to be some particulate matter suspended in the water column. That is why even on those magical days we measure visibility underwater in terms of feet, not miles like we do on land. Backscatter is not just the result of stuff floating in the water. Backscatter is what you get when the out-of-focus particles that are between your lens and subject are illuminated by light from a strobe, and that light gets reflected directly back to your image sensor. When that happens we are accentuating the presence of the out-of-focus particulate by lighting it. And we are drawing viewer attention to the backscatter. Double whammy!

There is nothing we can do to make the suspended particles disappear, although slow movements, staying off the bottom and maintaining neutral buoyancy can go a long way toward helping us minimize backscatter. In addition, we can aim our strobes so that as little emitted light as possible strikes the out-of-focus particles that are between our lens and subject in the foreground of our frame. The way to accomplish this first is to move our strobe away from the lens. Second, instead of aiming a strobe at a 45-degree angle to the camera and right at the subject as photographers often do in tropical waters, in dirtier water you want to aim your strobe so that the head of the strobe is more parallel with the image sensor as opposed to being angled across the frame.

It can take some thought to wrap your head around this technique because it might seem like the light from your strobe will miss your subject. Two things to keep in mind here. If your strobe were to cast a rather narrow beam like a flashlight, the emitted light might very well miss your subject. But even strobes with comparatively narrow beams cast a beam that is much wider than the beam of most flashlights. It can be difficult to gain confidence in the fact that we have a wider angle of light to work with when using a strobe because we usually can’t clearly see the emitted beam when we shoot. However, with digital cameras you can review your image in the review mode to be sure that you did, in fact, light your subject.

If you did miss your subject, you can always adjust your strobe so that it is angled slightly inward. But try not to give in to the temptation of aiming your strobe dead center at your subject. Using the suggested technique will help minimize backscatter.

The good news is there is a solution to the harsh shadow problem. Add a second strobe. Light from the second strobe can be used to fill in the shadow.

In addition, from the perspective of minimizing backscatter instead of aiming both strobes straight ahead, you might actually be able to turn the strobes slightly outward. Yes, outward. Not Inward. The idea is to have the opposing sides of the subject lit by the “inside portion” of the light emitted by each strobe. This means that neither strobe will illuminate the out-of-focus particles in the foreground that are physically between the lens and the subject. This lighting technique is known as “edge lighting” and many experienced underwater photographers that work in California and other areas where the water is not as clear as it so often is in the tropics swear by this technique.

One more technique that can help minimize the distraction caused by backscatter deals with your angle of orientation to your subject. There is an oft-quoted mantra in underwater photography that suggests we get low (meaning we get below our subject) and shoot at an upward angle so we can frame our subject against a background of properly exposed blue to green water. In addition, shooting at an upward angle often adds dramatic appeal.

A problem that composing frames in this manner often introduces in darker water comes from the fact that a lot of the particulate matter that is suspended in the water column is lightly hued. If the water is relatively dark as it often is in California, then those lightly hued particles have a tendency to standout in our shots. To compound the problem, if the suspended particles are also out-of-focus, then they appear as lightly hued backscatter standing out against the dark background. Ouch!

Given that shooting at an upward angle can sometimes lead to backscatter, I suggest that at times when the background water is night dive black or relatively dark that you consider shooting at a level or even slightly downward angle. A downward shooting angle can help minimize the potential distraction caused by seeing a bunch of lightly hued particulate contrasted against darker water as can be the case when we shoot up. The background in a frame created with downward composition often consists of the lighter hues common to sand and some reefs. Lightly hued suspended particles have a way of blending into backgrounds of this nature as opposed to standing out as the particles do when set against a dark background. As a result, when shooting downward the suspended particulate often goes mostly sight unseen.

No one can make the suspended particles disappear from the water column. But by using the techniques suggested in this piece you can minimize backscatter and the potential distraction caused by suspended particulate. Doing that is certain help you create images that your audiences will appreciate.