Strange things happen in Northern California during springtime. Campgrounds and motels that were unoccupied most of the winter are now sold out. Coastal roads that were once empty are bustling with traffic. Large numbers of employees are mysteriously absent from their jobs. A case for the X-Files? No, it’s simply the beginning of abalone season. The red abalone is the world’s largest, and this mollusk thrives on Northern California’s inshore reefs. Red abalones are not as abundant as they once were, but with a little […] 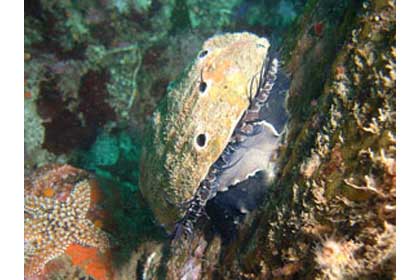 The California Department of Fish and Wildlife (CDFW), formerly known as the California Department of Fish and Game, is seeking stakeholder input regarding regulation options to reduce the take of abalone in 2014.  A key goal of abalone management is to provide for a productive and sustainable fishery. CDFW conducts annual field surveys to assess abalone population status and track changes in density (the number of abalone per given area) at established survey sites. Results from recent surveys have shown downward trends in abalone numbers, […]

Sonoma County Abalone Network (S.C.A.N.) is a non-profit public service Corporation (501-c-3) dedicated to the protection of the north coastal marine environment and the wise management of the abalone resource. The main purpose is that of public education and raising awareness to the abalone resource and the damage that illegal activities (poaching) is causing.  S.C.A.N. is a volunteer partner with the Department of Fish and Game and assists the department in roadside checkpoints and abalone “creel surveys.” During the prosecution of offenders, S.C.A.N. provides public […]

This special event will begin at Ocean Cove, Sonoma County on the California’s North Coast. It is open to free divers only and current California Department of Fishing Game laws apply. Entry fees are $30 if preregistered and $40 day of event. To receive a free shirt you must preregister.  All divers are required to fill out and turn in a waiver form and show current California fishing license and current 2010 abalone tags at sign in. All divers are required to register with at […]