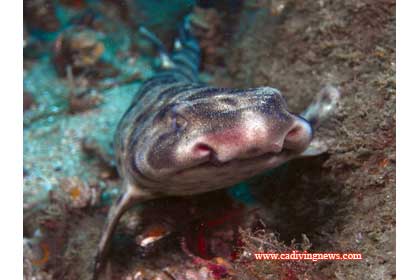 What can I say? I am a sucker for cute and interesting faces underwater (other than divers, of course). And fortunately, for California underwater photographers we have many. But for me, I am especially drawn to our bottom dwelling sharks, specifically horn sharks and swell sharks. What fascinating faces!

Of these two sharks I find the swell sharks to have the most interesting faces. Especially striking is the metallic golden colored eyes. Their flat heads spread out their funny “smiles” underneath. “Nostrils” just above the mouth give it an even more unusual appearance. Polish this off with a mottled and spotted skin and you have a face that can keep your camera busy for an entire dive.
Of the two horn sharks are the more frequently seen, so to spot a swell shark is a special treat. Ranging from Monterey to as far south as Chile they are the most common off Southern California. Divers mostly see them wedged into rocky reefs during the day. They are a docile shark and very easy to approach. During the night they move about to feed on small fish. While they can grow to as much as three feet long the specimens that divers most often see are less than two feet. They most commonly inhabit waters 15 to 120 feet deep.
Swell sharks get their name from their unique ability to gulp in large quantities of water when agitated. They can balloon to a tremendous size. This is a defense mechanism that protects them from predators by wedging themselves in crevices or making it difficult for the eater to consume them in a quick swallow. Do not attempt to provoke this behavior as it does it have the potential to harm them. They can in turn harm you as they can deliver a vicious bite. They may have small teeth but their jaws are powerful.
Locating a swell shark egg on the bottom is a special find. Within the semi-transparent unhatched egg case, a yoke and often an embryo shark can be clearly seen using a dive light. Eggs are often neatly tucked into small rocks around reefs but usually in plain sight. The mama swell shark lays two eggs at a time. Depending on the water temperature the eggs will hatch in 7.5 to 10 weeks.
Face it, for photographers, fish face photos are fun. And when it comes to subject material you can’t get more interesting a subject than a swell shark.