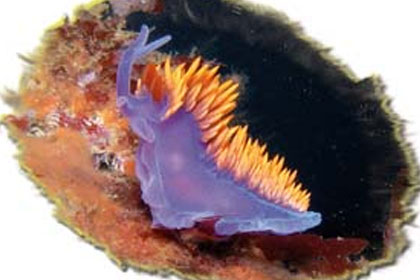 By Ken KurtisDecember 9, 2008No Comments

There’s an invasion brewing. They are lurking offshore, waiting for the right time to come closer. And when the time is right, they strike with a vengeance. If you’re an FBI agent reading this, calm down. I’m not talking about “scuba terrorists.” This invasion happens every year at this time. It’s the annual mating ritual of the common (or market) squid.

Each year from mid-December through March, squid migrate into shallower waters at night to reproduce. This also marks the end of their life cycle. Males seek out females, they mate, the female lays the eggs into huge masses or clusters, and the squid go off to die.

Not only is this an amazing cycle in nature, but it’s also one that’s easy to observe as there are a number of local sites where the squid and the eggs can be encountered. One of the best of those places is at Veteran’s Park in Redondo Beach.

You can do this as either a daytime or a nighttime dive. If you’ve never dove Redondo before, I’d suggest starting during the day. You won’t see live squid (the mating activity takes place at night), but you should be able to find the egg masses more easily.

They’re generally found 60 to 100 feet deep. Although the individual egg sac that a single squid lays is small (about the length and width of your index finger), the squid attach these to the bottom where other eggs have already been laid. So the egg clusters can be quite large, as much as four or five feet in diameter. And once you find one cluster, you’ll probably start finding more.

Doing the dive at night is more of a hit-and-miss affair since you won’t be able to see the egg masses unless your light sweeps across them. But now you have a chance at finding the squid and watching them mate.

One way to locate them is simply by sweeping your light across the bottom. But don’t forget that the squid can also be up in the water column, so it’s effective to sweep your light up and around (but not in your buddy’s eyes) as well.

Once you find a squid, keep your light on it and follow it. Eventually, you should see it hook up with the opposite sex. The two squid will approach each other tentacle-to-tentacle and lock in. The male will frequently flash or turn red. You may also notice other colors flashing/pulsing through the bodies of both squid.

After the mating is over, the female will start to squeeze the eggs out in a sac, sort of like a sausage. She’ll then dive head-first into a mass of existing eggs, attach her future offspring firmly, and then jet away. Her job is now done.

Regardless of when you do the dive, my recommendation is to use the parking lot stairs as your lineup point. I usually kick out about 50 yards and drop into 10-12 feet of water. I take a compass heading straight out, but then start my dive at a 45-degree angle to the left. When I hit the shoulder of the canyon (30-35 feet deep), I go straight down to about 70 feet. Then I turn right and follow that depth contour (roughly paralleling the shoreline) and when I get to 1000 p.s.i., I turn right again, come out of the canyon, and then make another right turn, running at 45 degrees back towards the shoreline and my starting point.

(SHAMELESS PLUG: If you don’t think you can do that kind of a navigation, sign up for the Reef Seekers free monthly Beach Dive/Navigation class, also taught at Veteran’s Park.)

The life cycle of the squid is one of those fascinating marvels of nature. Even more marvelous is the fact that we can see it ourselves without a National Geographic TV special. Make plans to seek out the squid this season. You’ll be glad you did.