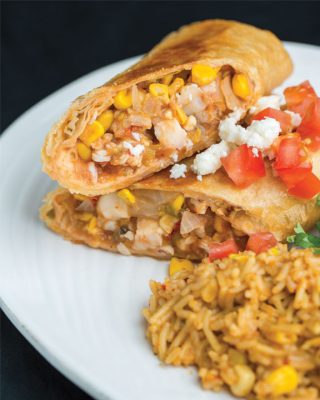 A "Happy Accident" - The Lobster Chimichanga

Trevor Cook The SCUBA Chef
Sometimes mistakes turn out to be “happy accidents.” Take the chimichanga, for instance. One of its origin stories is that many years ago the chef at an Arizona El Charro restaurant dropped a burrito in the deep fryer by accident; when he noticed his mistake he used the made-up swear word, “chimichanga.” And we’ve been savoring his culinary mishap ever since. Since I still had some lobster tails in the freezer from last season’s hunting, I intentionally put a seafood spin on the classic deep-fried recipe with my lobster chimi. Remember, “Always ‘Stay Legal,’ and never take more than you’ll eat.”
Print Recipe Pin Recipe
Servings 4 servings

As with most spicy Mexican dishes, my go-to is an ice-cold Negra Modelo. Wine lovers will enjoy a sweet and sparkly pairing, such as a Moscato d’ Asti or perhaps a dry rose’.