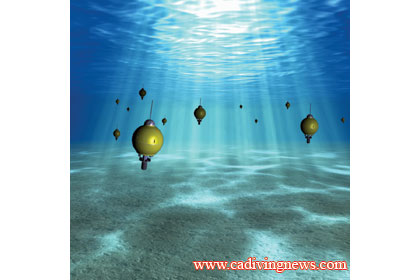 By California Diving NewsFebruary 18, 2010No Comments

In an effort to plug gaps of knowledge about key ocean processes, scientists at Scripps Institution of Oceanography at UC San Diego have been awarded nearly $1 million from the National Science Foundation to develop a new breed of ocean-probing instruments. These “drifters” are designed assist in research on areas ranging from marine protected areas to harmful algal blooms.

Scripps researchers Jules Jaffe and Peter Franks will be spearheading an effort to design and deploy autonomous underwater explorers, or AUEs, which will trace fine details of fundamental oceanographic mechanisms that are vital to tiny marine inhabitants.

While oceanographers have been skilled in detailing broad ocean processes, a need has emerged to zero in on functions unfolding at the small scale. By more clearly defining localized currents and focused data about temperature, salinity, pressure and biological properties, Jaffe and Franks believe AUEs will offer new and valued information about a range of oceanic phenomena. The miniature robots also can aid in science’s development of marine protected areas by following currents for determining critical nursery habitats, tracking harmful blooms of algae and potentially even contributing to monitor events such as oil spills and airplane crashes.

“The AUEs will fill in gaps between existing marine technologies,” said Jaffe, a research oceanographer with Scripps’ Marine Physical Laboratory. “They will provide a whole new kind of information.”

The AUEs will work through a system under which several soccer-ball sized AUE devices are deployed in conjunction with many–tens or even hundreds–of pint-sized AUE explorers. As they move about the ocean, the smaller-sized AUEs will use acoustic transmissions from the “mothership” AUEs to ascertain their positions. Collectively, the entire “swarms” of AUEs will help track fine ocean currents and flows that organisms at the small scale, tiny abalone larvae, for example, experience in the ocean.

“AUEs will give us information and statistics to figure out how the small organisms survive, how they move in the ocean and the physical dynamics they experience as they get around,” said Franks, a professor of biological oceanography in the Integrative Oceanography Division at Scripps. “AUEs should improve our ocean models and eventually allow us to do a better job of following the weather and climate of the ocean, as well as help us understand things like carbon fluxes.”

Franks, who conducts research on marine phytoplankton, among other areas, says the new concentration on dense sampling at small scales will help resolve some of the patchiness in understanding the physical and biological properties on those scales.

“Plankton are somewhat like the balloons of the ocean floating around out there,” he said. “We are trying to figure out how the ocean works at the scales that matter to the plankton. You put 100 of these AUEs in the ocean and let ‘er rip. We’ll be able to look at how they spread apart and how they move to get a sense of the physics driving the flow.”

During the initial pilot phase of the project, Jaffe and members of his laboratory will build five or six of the soccer-ball-sized explorers and 20 of the smaller versions. An outreach component of the project will enlist school children to build and ultimately deploy AUEs.

For marine protected areas, AUEs can help inform debates about the best areas for habitat development. With harmful algal blooms and oil spills, the instruments can be deployed directly onto outbreak patches to gauge how they develop and change over time. In the case of an airplane crash over the ocean, AUEs should be able to track currents to determine where among the wreckage a black box may be located.

In a related funding award, the researchers have also been given $1.5 million from NSF’s Cyber-Enabled Discovery and Innovation initiative for designing and developing the systems necessary to control the movement of AUEs. That aspect brings Jaffe and Franks together with researchers at the Cymer Center for Control Systems and Dynamics at UCSD’s Jacobs School of Engineering and the San Diego Supercomputer Center.

More information about AUEs can be seen in a Birch Aquarium at Scripps Perspectives on Ocean Science presentation by Jaffe: www.youtube.com/watch?v=kbNx2K1ttLQ.