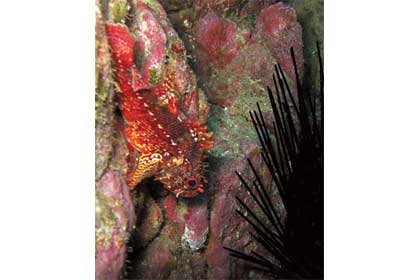 Rocks, Rainbows, Scorpions: A Playful Look at the Scorpaenidae Family

Paper covers rock. Scissors cut paper. Rock dulls scissors. You know the game, right? In the California fish version, called “Rocks, Rainbows, Scorpions” the rainbow scorpionfish beats its California scorpionfish cousin, but the rockfish beats ’em both with its “magnificence.” Read on to learn why — and to decide if you agree with the rules of this made-up game.