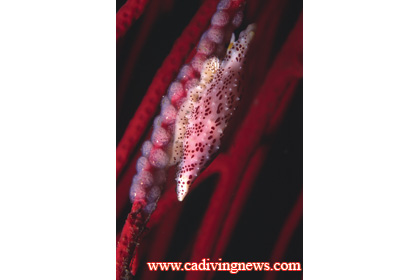 The most common California reef fish, both by number of individual animals and number of species has got to be the rockfish (genus Sebastes). On every dive you are likely to see dozens of these fish and over a dozen different species. They come in many colors and fill an important niche in the reef community.

The fossil record of rockfish from California goes back to the Miocene, some 5 to 30 million years ago; and they have changed little since then. Rockfish belong to a group of bony fishes called Actinopterygii, the ray-finned fishes. These possess bony spines (called rays) that support their thin fins. This contrasts the fleshy, lobed fins that characterize the Sarcopterygii. In terms of numbers, actinopterygians are the dominant class of vertebrates, with nearly 30,000 species, and they are ubiquitous in fresh and salt water.

Rockfish are further classified into the order Scorpaeniformes. These are known as “mail-cheeked” fishes due to the presence of a unique bone that runs across the upper cheek, just below the eye socket. Scorpaeniform fishes are carnivorous, mostly feeding on crustaceans and on smaller fish. Most species live on the sea bottom in relatively shallow waters. They typically have spiny heads, and rounded pectoral and caudal fins.

Scorpaenidae, the scorpionfish, are a family of mostly marine fish that includes many of the world’s most venomous species. As the name suggests, scorpionfish have sharp spines coated with venomous mucus, and can deliver a painful sting. The family is a large one, with hundreds of members. They are widespread in tropical and temperate seas, but mostly found in the Indo-Pacific. They should not be confused with the cabezones, of the genus Scorpaenichthys, which belong to a separate, though related family, Cottidae. All of the California rockfish are venomous, but not nearly as toxic as their lionfish relatives. Within the family Scorpaenidae, 102 are members of the Genus Sebastes, and 97 of these are found in the North Pacific. The coast off South California has the highest rockfish diversity, and 56 species have been recorded in the Southern California Bight.

Rockfish range from the intertidal zone to almost 3000 m deep, usually living benthically on various substrates, often around rock outcrops. Some rockfish species are very long lived, amongst the longest living fish on earth, and some individuals may live for over 200 years.

Although structurally nearly identical, California’s rockfish fill very different niches in the marine environment due to behavior and food preferences. Blue rockfish, for instance, are opportunistic feeders that hang out around the outer edge of kelp beds feeding on jellyfish and salps. Kelp rockfish prefer to hide among fronds, while gopher rockfish are ambush predators that are mostly found resting on the bottom or in small holes in the reef. Both feed principally on juvenile rockfish in summer and invertebrates in winter. Black and copper rockfish are particularly fond of the crustaceans, especially amphipods and copepods. China rockfish prefer brittle stars, shrimps and bottom fishes.

Rockfish on the average must be over 10 inches long and 7 years old before they can reproduce. Rockfish are livebearers and give birth to 50,000 to several million pelagic larva each season. This is why it is important to not take small fish before they have a chance to mature and reproduce.

The problem that rockfish have is not their beauty, but their taste. Rockfish are an important sport and commercial fish, and many species have been over fished, and seasons are tightly controlled in many areas. There was once an aggressive inshore long line fishery that harvested mostly rockfish for the live fish market. This fishing practice drastically reduced the numbers of fish on our near shore reefs. Thankfully, this practice has been outlawed and with a shorter season other regulations rockfish populations are likely to rebound.