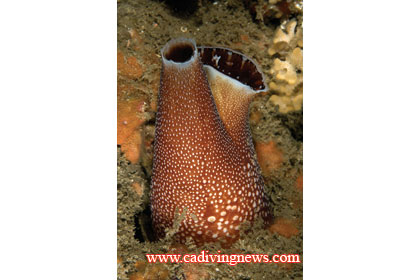 REEF Announces 2009 Volunteer of the Year

By California Diving NewsApril 13, 2010No Comments

REEF (Reef Environmental Education Association) has announced its 2009 Volunteer of the Year recipient, David Jennings of Olympia, WA.  David has been a member of REEF since 2006, conducted over 154 surveys in California and Washington, and is a member of the Pacific Advanced Assessment Team. He has surveyed the Monterey Bay National Marine Sanctuary with the REEF team the past two years.

Jennings is often heard saying the phrase, “Learn it, Love it, Protect it,” and is a good example of that himself. After participating on REEF’s annual AAT survey project of the Olympic Coast National Marine Sanctuary in 2008, David became concerned about decreasing Rockfish populations. Rockfish are especially vulnerable to over-fishing because they are long-lived species, some living to be over 100 years old. After looking at the REEF data for the region as well as the existing rules for Rockfish harvest, David submitted a series of proposed rule changes to the Washington Department of Fish and Wildlife (WDFW).

Jennings then went on to get involved directly. In June 2009, he was appointed by the Governor of Washington to a six-year term as one of Washington’s nine Fish and Wildlife Commissioners–another volunteer conservation position.

Picking just one outstanding volunteer each year is difficult. REEF volunteers are the cornerstones of the organization. Without this dedicated corps, our marine conservation programs would not exist. They are central to the REEF Volunteer Survey Project, in which over 12,000 divers and snorkelers have submitted their sightings information to the largest marine life database in the world. Over 6600 surveys have been submitted in California alone.

The Reef Environmental Education Foundation is a grass-roots organization that seeks to conserve marine ecosystems by educating, enlisting and enabling divers and other marine enthusiasts to become active ocean stewards and citizen scientists. For more information, go to www.REEF.org online.