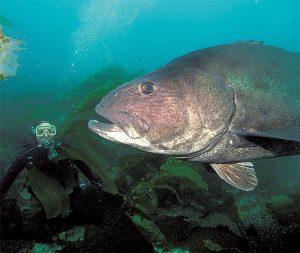 It is no secret that through the last 100+ years the pressure from industrial expansion and population growth in California has put our ocean environment at serious risk. Can that risk be mitigated? Is any damage that has occurred reversible? Yes to bosdth questions. There is a solid argument for optimism.
That case for optimism comes from the joy of those who’ve experienced our underwater parks first hand. The marine life abundance, size and diversity are undeniable. Studies show that there are 20 percent more species inside of the reserves than outside and 28 percent are bigger in size. We California underwater explorers are blessed and lucky to have the opportunity of dive into the success stories that are our California Parks In The Sea — the Marine Protected Areas (MPAs).
There are now over 120 MPAs through the Marine Life Protection Act (MLPA) of 1999. Looking over a map of California’s coastline and its offshore islands, one marvels at the patchwork of MPAs. Prior to 2007, less than 1 percent of State waters were under some kind of protection. That is now up to approximately 18 percent. While these MPAs were implemented between 2007 and 2012, several of these underwater parks have been in existence for a long time.
The idea of an MPA isn’t original. Small underwater parks, preserves, reserves and protected areas had been popping up along the coast and out at the islands since 1929. The successes of these smaller parks — thriving, abundant and healthy marine life — paved the way for more, and larger-scale ocean reserves and conservation areas.
Everyone is a stakeholder in the success of California’s MPAS, but it’s especially important that we, as divers, understand their significance and support their continued success. In this two-part feature, we’ll overview MPAs from a scuba diver’s perspective.

La Jolla Underwater Park
In 1929 the Scripps Institute of Oceanography designated thousands of acres of shoreline, tide pools, and seafloor at their campus as a marine reserve. It was the first of its kind in the nation and likely the world. This would later become the foundation of the San Diego-Scripps Coastal State Marine Conservation Area and the La Jolla Underwater Park.
Most San Diego divers are familiar with and enjoy the La Jolla Underwater Park. These 6,000 acres of ocean were officially recognized in 1970 by the San Diego City Council. A year later 533 acres within this area were designated as the La Jolla Ecological Reserve. This set the foundation for the Matlahuayl State Marine Reserve (SMR) that went in place in 2012 encompassing the entire area. Nothing may be taken or disturbed.
What makes this reserve so exciting is the variety of habitats. There are reefs, sea grass beds, kelp forests, sand flats and a deep-water submarine canyon and all the marine life to accompany each section. Some of the more unusual residents include pipefish, guitarfish, sarcastic fringehead blennies and leopard sharks. You’ll find red gorgonian gardens, clumps of colorful corynactis anemones, and in the winter massive schools of market squid use portions of the La Jolla Submarine Canyon to spawn and lay millions of eggs.
Laguna Beach State Marine Refuge
Established in 1974 by Laguna Beach City officials, the Vedder Ecological Reserve was significant in its thorough protection of the reefs and adjacent sea floor. This reserve was quite small, extending from Divers Cove south to the Main Beach including the popular Picnic Beach (Heisler Park) dive spot.
This original reserve had its shortcomings, but set the foundation of the much larger Laguna Beach State Marine Reserve, where nothing may be taken or disturbed. In addition, two other conservation areas flank this reserve.
Several dive sites under the umbrella of the Laguna Beach SMR include Crescent Bay, Shaw’s Cove, Wood’s Cove, and Moss Street.
With the original Vedder Reserve as its core, marine life here is flourishing. Kelp growth varies, but it’s back again, along with the usual proliferation of kelp forest fish and other critters. Thanks to no-take restrictions, lobster numbers are increasing.
Look in the kelp and on the reefs and you will see large sheephead, a variety of rockfish and perhaps even spot a giant black sea bass. And gray whales have been known to come in close to shore. Perhaps the most pleasant surprise is the return of the abalone.

Avalon Underwater Park
Established in 1962, many divers consider the Avalon Underwater Park to be the crown jewel of California Underwater Parks. Also known as “Casino Point,” the Park received an additional layer of protection by the State of California in 2012 being designated a State Marine Conservation Area (SMCA). While feeding the fish is allowed, nothing can be taken or disturbed.
Although this tiny slice of ocean paradise is small (only about 2.5 acres) it is impressive.
The kelp forest remains nearly year-round. Garibaldi swirl in perhaps the largest concentration of the entire south coast and its islands. There are blizzards of blacksmith fish and big fat tame calico bass hang out in the kelp. Speaking of tame, keep your eye out for big ole’ Oscar the sheephead, who has been around for decades (although longtime visiting divers have come to realize that this is probably his great-grandson).
Gigantic black sea bass cruise the reef appearing in all but the coldest winter months. It is not unusual to see several giants at once. At the other end of the size spectrum are the thousands of colorful blue-banded gobies. Equally colorful are the Spanish shawl nudibranchs. There are horn sharks, unusual blennies, stars, sea cucumbers, sea hares, abalone, and more.
It’s perfect for new divers, as a set of steps make for an easy entry. There is a van on location offering gear rentals and air fills. New restrooms have been added just around the corner.
Farnsworth Bank
Located two miles off the backside of Catalina Island, Farnsworth Bank offers spectacular diving on a series of deepwater pinnacles decorated in extensive growths of purple hydrocoral. The original reserve was put into place in 1973 to protect the beautiful hydrocoral from harvesting.
In 2012 the Farnsworth Offshore SMCA encompassed this original area.
While this offshore MPA prohibits the taking of the precious hydrocoral, pelagic finfish and some limited commercial taking of fish is permitted. Many consider that these exceptions are compromises that should not have been made.

More Catalina Island MPAs
The front side of Catalina has several important MPAs, a good thing considering how much pressure it receives from mainland visitors.
A few others worth mentioning include the Long Point SMR that extends west from Long Point to approximately Empire Landing covering several dive sites including Italian Gardens, Twin Rocks and Goat Harbor. In addition to a wonderful array of marine life these locations are noted for sightings of the giant black sea bass spring through fall. As with any SMR nothing can be taken or disturbed.
While the Blue Cavern has been protected from some time, that area has been relatively small. With Blue Cavern becoming an MPA the boundaries were expanded considerably. The Blue Cavern Onshore SMCA encompasses the popular Bird Rock dive site on its western border. This is a “No-Take” zone.
On the west side of Isthmus Cove the area from Lion Head Point to Arrow Point has long been established as an invertebrate reserve. It is now officially designated as a State Marine Conservation Area where, just as before, the take of lobster and other invertebrates is prohibited. There are a lot of big lobsters here to observe and photograph. Spearfishing is allowed but there is little to take.

Channel Islands  National Park
In 1938 President Franklin D. Roosevelt chose to preserve and protect Anacapa and tiny Santa Barbara Islands as the Channel Islands National Monument. It was only in 1980 that three more islands — Santa Cruz, Santa Rosa, and San Miguel -— were added and the area was renamed the Channel Islands National Park.
Because of its National Park status is it is better patrolled and commercial activity is severely restricted. Some areas are open to game taking, but several sections have been designated as part of the State MPAs, so it pays to be aware of your location. There are a couple of areas deserving of special mention.
Anacapa Island
The front side (mainland or north facing side) of Middle and East Anacapa Island was been awarded underwater protection first as a National Biosphere Reserve in 1976. It is the oldest fully protected area in the Northern Channel Island Chain.
Because of the long history of protection this is one of the most delightful areas for diving. There is a lot to be said about the variety of marine life that lives here but what most divers come away with after a visit here is how easy it is to approach the unusually large fish.
Always worth a visit in this area is Cathedral Cove. You can spend an entire dive having fun with some of the biggest male sheephead in all the Channel Islands. Bang and rub rocks together and they will swim right up to you.

Gull Island
Another Northern Chain favorite is the more recently formed Gull Island SMR. Gull Island is a large rocky outcropping on the backside of Santa Cruz Island. The reserve is a large area and also encompasses a section of the main island shoreline itself.
As with any reserve, nothing can be taken or disturbed. Here you will find purple hydrocoral, playful sea lions, cabezon, and torpedo rays known for their capability to deliver a hefty jolt of electricity. Do not touch. They do not fear divers and may even approach you in slow and deliberate movements.

We are fortunate to have such rich resources available offshore for our enjoyment and for that of future generations. We share a responsibility to help protect our marine resources.
In a subsequent feature we’ll highlight a few MPAs dotting the Central and North Coast as well as California’s Marine Sanctuaries.

The ABCs of MPAs
MPA: Marine Protected Area
A location along the California coastline and around the islands. Each has a particular designation outlining its level of protection for archeological, geological and marine life protections. A total of over 120 areas exist along the coast and at the islands.

MLPA: Marine Life Protection Act
The law passed in 1999 that outlined the MPAs, many which encompassing a small amount of already established protected areas that had been in existence for a number of years.
Although passed into law implementation did not begin until 2007 and completed in 2012 depending on the particular area.

SCMCA: State Marine Conservation Area
Each designated area contains its own individual regulations. Most protect invertebrate life but many allow the take of finfish or pelagic finfish.

SCMCA (No-Take)
Essentially the same at the SCMCA (managed by the State of California) but nothing, including and especially marine life may be taken or disturbed.

SMR: State Marine Reserve
Nothing may be taken or disturbed.
NOTE: Whenever the wording “Reserve” is tacked on the end of a phrase, it is a no-take zone.

SMP: State Marine Park
Nothing may be taken or damaged for commercial purposes. Regulations for human sport use vary by Park area.