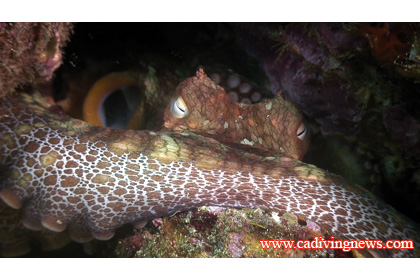 By Walter MartiApril 23, 2009No Comments

I’ve always found the octopus to be a great subject to videotape. They can be quite charming and elusive. I’ve been guilty, as many divers are, of just plan harassing the poor cephalopod instead of the gentle approach. When I’ve seen them in the open, I would rush to get a shot, just to have them scurry away. Sometimes this is a great ‘action shot’ as they change colors and textures. But the encounter was fleeting and left me feeling a bit empty. Many times I’ve seen them just outside of their den. I tried in vain to coax them out. They just retreated into the deepest recesses, never to be seen. They, not me, always initiated my best encounters.

In 2007, I dived a lot under the Newport Pier, gathering footage for one my latest underwater videos. In early fall a lot of octopuses were there. Hiding in whatever shells and garbage they could find. I found most of them to be quite approachable. They didn’t scurry away like most of the others. It could be the fisherman overhead keep the predators away from them. One day an octopus was slowly milling about. Once the video lights kicked in, it started using the lights for hunting. The lights didn’t scare it away. It may not have been familiar with bright lighting. It can be fairly dark under the pier. After a while the octopus had enough of me and tried to hide in a shell. It was still fairly exposed. I knew it was trying to hide from me. If it only had a door to close behind me. I looked around and found a large piece of shell. I slowly offered it to her. She gently unrolled an arm and picked it up. Now she had a door to close behind her. That was a great encounter I’ll always cherish.

Last September, I had my greatest encounters. I was 45 minutes into a dive at Anacapa Island when I came across a small cluster of empty shells outside of an indent in the rock. My mind told me, ‘an octopus den.’ I looked closer and an urchin was sitting over the entrance. I spotted an octopus behind and below the urchin. I gently transplanted the urchin, now the octopus was visible. When my video lights hit her, she retreated. I waved my fingers in front of her; she stopped and slowly came back out. I then picked up one of the shells, thinking she may want a door. She uncurled an arm, reached out and inspected the shell. Not interesting enough. She recoiled the arm and sat staring at me. I tried another shell, same result. We did this a couple of times. I thought that she might not be looking for a door, but instead for lunch! I found a small snail and offered it to her. She took it from my hand, inspected it and discarded it. Her eyes said, “This does not please me!” I told her to wait; I’ll try to find something better. Shelled animals just don’t seem to be around when you need to feed a hungry octopus. I finally found a wavy top turban shell. I’ll give it a try. I thought it might be like trying to open a macadamia nut without a hammer.

When I returned she was still at home waiting. I presented her the turban snail, she again sent out an arm to investigate. The arm checked out the top of the shell and retreated. I picked up the shell and showed her the white underside, with a bit of the snail protruding. Again she sent out an arm, she slowly circled the opening, and then touched a bit of the snail. Suddenly, she was way more than interested! The game was on! Half the arms flew out and brought it up to the den opening. She came out and engulfed it. A bit of white fluid shot up through her arms. I thought it was the coup-de-grau. She tussled with it for and while. Tried to drag it into the den. It wouldn’t fit. Outside she wrestled with it and finally settled on top of it. Upon inspecting my video, 10 minutes after the ‘kill’, I saw the operculum solidly shut. Stalemate!

When I came upon this octopus, I had 20 minute of tape left. I was 37 feet deep, a quarter tank of air and in a toasty drysuit. I thought that I would let it play out until I ran out of air, or tape. Not moving much my bottom time increased dramatically. At 77 minutes the tape finally ran out, the stalemate has been unchanged for 20 minutes. I left. I made my safety stop, heard the underwater recall, calling me. Everyone on the boat was finishing lunch, all tanks were filled, the captain wanted to go to the next spot. I surfaced glowing with the experience.

Next time when you come across this intelligent cephalopod, don’t chase or harass it. Make friends with it, offer it a door for its house, or a lunch.

Walter’s videos can be seen at http://wm.diver.net