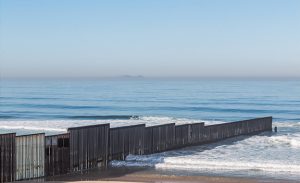 Political borders are essentially meaningless to marine life, as they can swim or drift across them without concern. Recently several marine critters have entered into southern California waters, including Catalina, as somewhat natural range extensions through dispersal. I find these new arrivals of great interest. Fish such as barracuda, yellowtail, tuna and even tiny anchovy can migrate through active dispersal, swimming into new or seasonal habitats. Others, such as marine invertebrate larvae and the eggs and larvae of fish not strong enough to swim long distances, rely on passive dispersal in currents. Drifting kelp rafts can transport invertebrates and fish over significant distances, as my research back in the 1960s and 1970s demonstrated.
Once these critters arrive in a new habitat, they face the challenge of “naturalization” or as we biologists refer to it: ecological and reproductive establishment. For a southern species to adapt to life in our more temperate seas requires several things. First, the water temperature throughout the year should be within the survival range for the species. Some species with wide depth ranges farther south can find acceptable conditions in shallower waters here.
It must also find adequate food sources in the new habitat. Some critters are highly selective in what they will eat, and are more likely to starve in a new environment. Scientists have noted that some generally herbivorous southern species like halfmoon and opaleye may add invertebrate protein to their diet in our cooler waters. Animals that are generalists and tolerate a wider range of food are more likely to find something palatable on the local menu. The young must also find appropriate foods to allow them to grow to maturity.
Individual survival is one step in adapting to a new location. However, for the species itself to persist there, and thus expand its geographical range, there is another critical factor. Water temperatures must be in the proper range to induce mating and support the development of the eggs, larvae and young. This is often a critical factor for any species arriving here.
Species from farther north can also adapt to our warmer waters through submergence. They merely descend to deeper depths where temperatures are more appropriate for them. Of course this may put them below normal diving depths and prevent their detection by most scuba divers. The Wave of Migration Over my lifetime, “immigrants” into Catalina waters from south of the border have included the scythe butterflyfish, finescale triggerfish, Guadalupe cardinalfish, plain cardinalfish, California moray, Argus moray, whitetail damsel, largemouth blenny, Panamic fanged blenny and green sea turtle just to name a few. Some have been successful in establishing themselves here long-term, others have not. So what is triggering this wave of migration? In large part it is ocean temperature change. It is well known that some species such as painted greenling (Oxylebius pictus), many rockfish (Sebastes spp.) and red sea urchins (Mesocentrotus franciscanus) have a northern, cooler water affinity while others such as garibaldi (Hypsypops rubicundus) and crowned (black) sea urchins (Centrostephanus coronatus) prefer warmer southern waters. As sea temperature changes over time, this can affect the geographic range of species with specific temperature requirements. An interesting set of experiments has been conducted up at Stanford’s Hopkins Marine Station. From 1931 to 1933 Stanford graduate student Willis Hewatt studied the intertidal invertebrates along an intertidal transect line. Then, from 1991 to 1993, Rafe Sagarin duplicated this study using the exact same transect line. He found that six of eight northern species had declined over the nearly 60 years and 10 of 11 southern species had increased.
Water temperatures at the study site had increased 1.3° F over that period with summer temperatures nearly 4° F higher. Sagarin attributed the changes in species composition to the increase in ocean temperature due to climate change. He ruled out any significant effect from shorter-term fluctuations such as El Niño or the unusual warm water events of recent years known as The Blobs.
The same factors are at work here in southern California, already a transition zone between northern and southern biota. Having studied marine biology at Harvard back in the 1960s when Dr. Roger Revelle was teaching there, I was aware of global warming (as was my classmate Al Gore). However, I didn’t have the forethought to establish a similar study area here on Catalina when I arrived back in 1969. It certainly would have been interesting to see the changes in marine invertebrates and fish in our transitional zone. Interesting Observations One interesting case of immigration from the south is a species widely believed to be well established in our waters. I’m referring to the California moray (Gymnothorax mordax). Although these fish are seen frequently by divers, ichthyologists believe they are incapable of reproducing in our cool waters. Instead, apparently pulses of long-lived leptocephalus larvae produced off Mexico, where water temperatures are above their minimum temperature for reproduction, continually restock the population in our waters. If true, and ocean temperatures continue to rise, reproduction may begin to occur in our waters in the future.