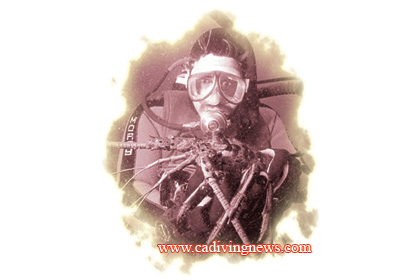 It’s 3 a.m. in mid-September 197xx and I’m roaring down the 405 Freeway with a crazy person driving. All the windows are down and the 70 mph wind is shrieking through the 10-year old Ford.

Suddenly the maniac lifts both hands from the wheel and yells, “Let it go!” The thought strikes me: I’m in trouble… Snugging my seatbelt another notch tighter, I reach under my thigh where a stack of five of the driver’s wrinkled $10 bills are wedged. Per instructions, I pull one out, hold it in front of me at dashboard level, and let it go….

The gale-force wind snatches the bill from my fingers and whirls it around the interior of the car. Just before it whips out the driver’s window, his left hand snakes out and snares the escaping Hamilton.

“Yeeeehaaaw!” “And that’s the way you catch lobster”, he crowed.

This surreal situation took place with a friend… no, that isn’t accurate. An acquaintance I’ll call Roy. Roy claimed to be the best and baddest bug diver in California. This claim came up one evening in a local bistro and was challenged by me.

“Why do you think you’re the best?” I asked.

“Because I’m serious and I train,” he responded.

“Train? How? You practice catch and release in the off season,” I asked.

I don’t recall exactly, but some alcohol may have been involved in the event that is described at the beginning of this piece. I do recall that the lobster training drive down the 405 was terrifying, and I ended up walking home after Roy finally pulled down an off-ramp and slowed at the bottom.

Now, I certainly don’t offer this as an example of something to emulate, but rather the seriousness, the discipline, the insanity that overwhelms some divers who pursue the wily Paniluris interruptus of our local waters. This instead should serve as a warning to those of us who can maintain some shred of sanity when it comes to bug hunting.

Let me also provide a cautionary tale regarding choosing a buddy to bug dive with. Once in my diving career I made the mistake of assuming that two of my closest friends, sane and rational in every situation, would carry that demeanor with them while bug diving as well; it was an unfortunate misjudgment on my part. While the three of us were diving at Santa Barbara Island soon after the opening of lobster season, I learned the value of years of friendship when weighed against a 12-pound bug.

Our first dive of the day found us in clear, warm water with a nice population of bugs to choose from. Each of us had a few bugs—two-to-four pounders—in the bag, when on turning the corner of a reef, I spotted an immense bug lounging in front of a small cave. A flurry of fins and froth as all three of us raced for the hole produced nothing but Mr. Lobster calmly backing into the cave and out of reach. Being a bit less consumed with lobster fever than my buddies, I backed away and waved them to the cave. They looked… Gee, it was kinda small… One of them actually made a halfhearted attempt to enter the hole, but backed out when his tank dragged against the top of the opening. They looked at me, shook their heads “no” and waved me to the cave.

Now I had more experience than either of my buddies, had done some commercial diving, and actually should have known better, but in the heat of the moment, I admit I was overwhelmed by testosterone poisoning, the “me-macho” syndrome, bug fever, and the thrill of hunting a trophy bull lobster, something I would never do today. I doffed my tank, laid it between my legs and my regulator in my mouth I snaked into the cave after Mr. Big. The bug was about eight-feet back where the hole dead-ended, watching me wiggle toward him. As I got within a couple of feet of huge crustacean, he ran right up to me. I grabbed hammer-handled sized horns and the prize was mine—or was it? Now that I had the bug, I couldn’t use my hands to push my self out of the hole. I began using my knees to worm my way back, and managed to get out far enough to where I could feel my buddies pulling on my fins, but between the tank between my knees and the giant bug occupying both hands, I was a bit stuck. Well, your friends are there to help a guy when he gets stuck, right?

I thought, I’ll just pass the bug down my body and hand it to my buddies then, unencumbered, they can just pull me out of the hole. The bug was into this and seemed very willing to slide down my body with little encouragement. Only when I felt the emphatic tugging on the critter, indicating that he was now in custody of my good buddies, did I relinquish my vice-like grip on Mr. Big.

Cool! “Now my good buddies will grab my fins and pull me out of here, too,” I thought.

I waited… And waited… “Well, it’s probably taking them some time to bag that monster,” I thought. Still I waited. And waited. Finally, scrunching my head around so that I could see out the mouth of the cave, I was greeted by the sight of—nothing! They were gone, and the big bug with them. As I inch-wormed my way back out of the hole, I began to have uncharitable thoughts about my so-called buddies.

Though both of these examples are true and offered only slightly tongue-in-cheek, the fact of the matter is that some divers seem to lose all common sense when it comes to lobster diving. In the most recent Florida mini-season, a two-day lobster diving frenzy in August, four divers died. Now I like to believe that we West Coasters are more rational than our East Coast brethren, but the truth is Lobster Madness infects California divers, too. Keep this in mind, and have a safe and sane lobster season, and don’t forget your Lobster Card.