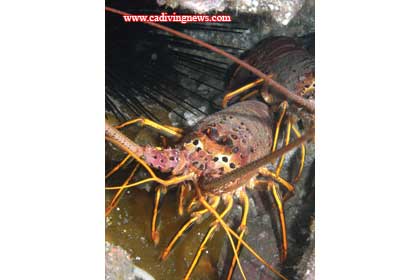 How to Photograph Lobster

Now that the fever of lobster hunting has died down as far as eating them goes, perhaps it is time we pick up our cameras and turn our attention to photographing them instead. These funny crustaceans that we just grab and head them off to the dinner table are actually quite interesting creatures, albeit on the simple side.

ABOUT LOBSTER
The California spiny lobster (Panulirus interruptus) is actually not a lobster, per se, but rather a crayfish. They lack the large front claws of their Northeaster cousins (although our females have tiny claws on the rear legs for tending the eggs on the underside of the tail). To protect themselves they have a tough spiny exoskeleton that they have to shed (molt) to grow. Empty shells are often found on the bottom which are not dead lobster but rather their molts. Lobster can be found on Southern California reefs year-round, but you can only take them in the in the fall and winter (see Fish and Game restrictions for specifics) as they breed in the spring and summer. And the size limitation allows for the lobster to breed at least once before being caught and headed for the boiling pot.
Females store eggs under the tails oxygenated by large tail appendages. Males contribute the sperm in packets that the female stores under their tail (appearing as black blotches) for use at the proper time.
Lobsters are nocturnal, holing up in the daytime in cracks and crevices in the reef. While it is easy to find them during the day, even poking their heads out of their rocky homes, to see one out in the open is rare. That only occurs at night. But since they are very active at night, I suggest you limit you lobster photography to the daytime.
YOUR APPROACH
California spiny lobsters are stupid but highly reactive creatures. If you find one in a hole or crack with its head sticking out enough for a photo, you can usually approach it with ease so long as your actions are smooth, breathing rhythmic and easy, and you get low so as to not cast a shadow on the animal. They are curious critters and will sometimes actually partially come out to greet you. Watch their antennae and that will tell you were their attention is focused and their state of excitement. With antennae forward and pointed at you, that is where their attention lies but that does not mean they will bolt away. Just avoid touching the antennae, as this will frighten them. By the way, the smaller lobsters are easier to approach.
CAMERA GEAR
One of the great things about photographing lobster is they are good subject material for the beginning underwater photographer with a point and shoot camera, as well as an excellent subject for seasoned pros.
Point and shoot users can have fun with overall shots, but just remember that the strobe on your camera has a limited range and you should try to get within five feet, preferably closer. A supplemental strobe will help tremendously.
Try getting within just a couple of feet, zoom and, if necessary, use your macro mode. Lobsters have fascinating faces and can be quite interesting photographed in tight.
For the more pro set-up macro compatible telephoto zoom is best. Again, you can get in real tight to the spiny face only a mother can love.
TECHNIQUES
Profile shots don’t do much good. A two/thirds portrait is nice, but be careful that the antennae do not get in the way of the eyes. The eyes are the most interesting part of the creature. For facial shots, get both eyes. If possible, get low and shoot up. They also have fascinating mouths.
With color that varies between bright red and a brick reddish-brown, bracket your exposures. For some reason the colors of the lobster can throw off the auto exposure a little bit.
Backscatter seems to be a real problem when it comes to photographing lobster, probably because you will be in a confined space and limited to the positioning of your strobe. Do the best you can, experiment and, if possible, remove a strobe from your camera and angle it in the needed fashion without the encumbrances of the arms. Be careful to not bang the rocks around the hole crack or crevice or as this will dislodge debris, causing backscatter.
Lobster photography can be a lot of fun and relatively easy. Apply a few simple techniques and you will have some face shots that are interesting and impressive.