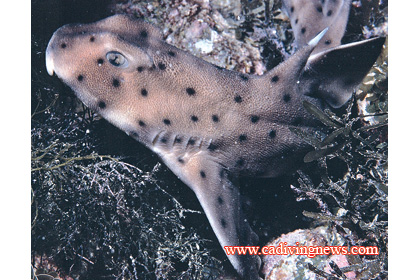 When most of us think of sharks, we think about large, efficient predators with big teeth. This description, however, is only true of a tiny fraction of the world’s approximately 400 species of shark. Most sharks are small, docile, and have really tiny teeth. These are the anti-sharks, and are actually a joy to watch and photograph. The California native, the horn shark is typical of these small sharks.

Horn sharks, Heterodontus francisci, belong to the order Heterodonontids, the bullhead sharks. Bullhead sharks first came into being in the early Jurassic period, about 200 million years ago. This order has one family Heterodontidae, and all of the eight species are in a single genus—Heterodontus. The Latin name of the order, family and genus derives from the observation that bullhead sharks have distinctly differently shaped teeth in the front and rear of their mouths. Their front teeth have three to five sharp cusps, and the back teeth are rectangular with cutting or crushing surfaces.

Horn sharks are commonly about two feet long, although they may grow to over three feet and have a large head for their size. Their tan to brown body is dotted with black spots. Horn sharks have a heavy brow over each eye, but lack the nictitating membrane (eyelid) that is found on many other sharks. They take their common name from the predominant spine in front of each of two widely spaced dorsal fins. Although rare in Monterey and the rest of the Central Coast, horn sharks are relatively common in the Channel Islands and the Southern California Coast. They are also fairly common near Mexican offshore Islands.

Throughout most of the daylight hours, horn sharks seek out a crevice or small cave and sleep. Usually only when the sun goes down do they become active, although some horn sharks are active during the day. At night they hunt for crabs, mollusks and other hard-shelled invertebrates. They will feed on a variety of pray, including urchins, shrimp, crabs, clams, squid, or octopus segmented worms, and even anemones. Horns are also known to feed on small fishes. These tiny teeth would be completely ineffective in taking on a larger animal, but are ideal for breaking up small, hard-shelled invertebrates.

Horn sharks are what biologists call oviparous—they are egg layers—and lay a distinctive corkscrew-shaped egg case. These sharks normally lay eggs in February to late April, and they take 6 to 10 months to hatch, depending on water temperature. A single horn shark may lay as many as 24 eggs in a season. After wedging her egg into a small crevice, the female shark abandons her egg, and the young shark is on its own from the moment its egg is laid.

During the day horn sharks are often found head first, back in a crevice with only their tail showing. Sort of like an ostrich—if I can’t see them, they can’t see me. At dusk they become active and are often observed prowling the bottom. If found resting on the bottom, and you choose to approach them slowly, they will often sit patiently and allow themselves to be observed or photographed. My secret to get closer to horn sharks or any other fish for that matter is not to approach them directly, but rather from a glancing angle. Try to avoid direct eye contact as you approach.

You will find horn sharks to be timid and docile animals, yet they exhibit a great deal of personality should you patiently observe them and try to capture their image. They are the furthest thing from the image of a predatory shark; they are the anti-shark.