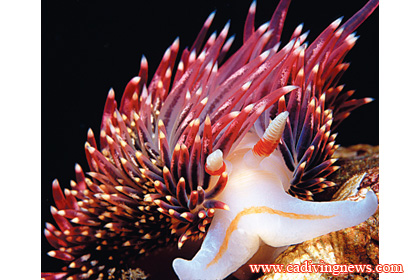 Help! I Have Created A Monster!

By Dale ShecklerDecember 14, 2009No Comments

Kim and I recently enjoyed a multi-day dive trip aboard the Conception out of Santa Barbara. It was four glorious days of exploring the Northern Channel Islands. While our main goal was article research and photography (with myself as the cameraman and her as the model) we had plenty of time to just knock around the reefs having fun. As much fun as we were having, I made a big mistake on the third day of the trip. I offered a camera to Kim.

Now I must say considering the short amount of accumulated time that Kim has spent in shooting images underwater, I have learned she is an accomplished underwater photographer in her own right. Even so, 95 percent of the time of our diving together, she is the model and spotter of photo opportunities and I am the photographer. Handing her a camera destroyed that system.

Now I was getting a taste of my own medicine. So many times Kim has waited patiently while I took shot after shot trying to get just the right angle and lighting. She has often turned blue with cold and maybe even a little red with anger. Her gestures would clearly, albeit gently, indicate it was time to move on.

Now she had the camera. And she was going crazy. I had created a monster. Nudibranchs–poof!–they were a victim of her strobe. Little crabs, juvenile garibaldi, urchins, stars, you name it, they were fodder for her lens. Meanwhile, I was the one waiting, getting cold, and encouraging movement along the reef.

A few dives of that and I was trying to figure out how to pry the camera from her pruned hands. You could almost see the fanaticism in her eyes. It was nitrogen that finally slowed the monster down, at least causing us to sit out one dive. Looking through her numerous images you could see that she was again showing her talent, but not wanting to feed the monster, I kept the praises to a minimum.

Perhaps it is time to bring out the photo monster in you. Underwater camera setups have never been so inexpensive and easy to use. You’ll find yourself like Kim devouring up the reef critters with your lens. Just make sure you have an understanding buddy.