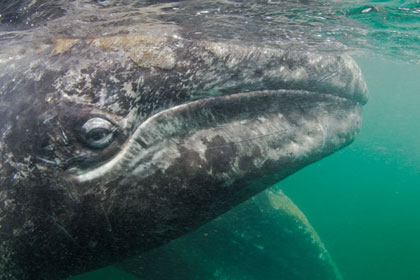 Dream It, Do It

By Marty SnydermanApril 3, 2014No Comments

A blue whale, the largest creature to have ever lived, appears on the edge of visibility and then comes into view as it swims through a dense concentration of krill-like crustaceans upon which it feeds. Two male sarcastic fringehead confront each other, opening their gaping mouths as wide as they can in an effort to intimidate their opponent and claim their territory. Cruising in the open sea, a Pacific white-sided dolphin grabs a strand of free-floating kelp with its pectoral flipper as it swims by. Common squid gather by the hundreds to mate on a winter night, and a harbor seal looks you right in the eye.

These are only a few of the more mesmerizing scenes in a short film shot by Howard Hall and produced by his wife Michele. Other scenes include that of a golden kelp forest swaying back and forth as it keeps in perfect synchrony with the ocean’s ebb and flow, a sevengill shark swimming through another kelp forest, a sunflower sea star preying on a gathering of brittle stars, a still photographer swimming in the open sea while photographing an ocean sunfish, a reef covered by a carpet of bright red corallimorphs commonly known as corynactus anemones, and a playful herd of California sea lions cavorting at a Channel Island rookery. And that is still only a partial list.
If you are an experienced California diver the Halls probably do not need an introduction. You might have met them at one of the many venues throughout the state where they have shown their films over the years. Or perhaps you have seen one of their many underwater IMAX films. Even if you have not met Michele and Howard, you probably know their work.
But for now it is not Michele and Howard that I want to comment on. Instead, I want to share with you the location where this film was shot. The name of the film is California Dreaming, and as the title suggests every scene was shot off the coast of California. In fact, as I heard Howard tell a packed house one evening last fall at the San Diego UnderSea Film Exhibition, every scene was shot within 100 miles of where we were sitting at that moment.
You can see the film by going to howardhall.com and looking under “video demos.” Better yet, everything you see in California Dreaming can be seen right here in California. You don’t have to settle for watching it on a screen and dreaming about it when you can gear up and become the star of your very own scuba show.