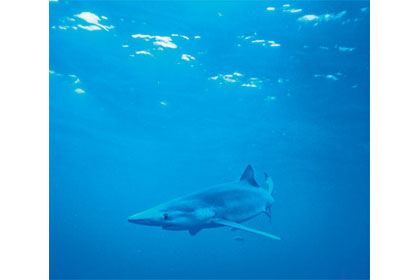 Blue sharks (Prionace glauca) are among the easiest sharks to identify. With their thin, sleek bodies — metallic blue on the tops and sides, snow white underneath — they are nearly unmistakable. In addition, blues have long pointed snouts, large round eyes and scythe-like tails. Their pectoral fins are exceptionally long.

Blues are members of the largest shark family, Carcharhinidae, which has 60 species and 12 genera. Carcharhinidae are also known as requiem sharks. Exactly why, no one seems to know. All have the following characteristics: they are viviparous (the young are born live), they have nictitating eyelids, the first dorsal fin is in front of the pelvic fins and the lower lobe of the tail fin is well developed. Blues, however, are considerably different from most requiem sharks, which include the tiger, silvertip, gray reef, silky, Galapagos, oceanic whitetip, Caribbean reef, blacknose, blacktip reef and blacktail reef sharks. The blue shark genus, Prionace, contains only one species, glauca.
Blues were once some of the most abundant sharks, found in both temperate and tropical waters worldwide and one of the few pelagic sharks that could be reliably encountered off the West Coast. Today their numbers are so depleted (except for the West Coast) that the International Union for Conservation of Nature (IUCN) has listed them as Near Threatened.
It is estimated that 10 to 20 million are killed each year. While blues are purposely caught by sport fisherpersons, most of those caught commercially are the bycatch of other fishing. Often, only the fins (which become sharkfin soup) are used.
For those who consider shark encounters less than serendipitous, it is important to note that blues (or any other pelagic sharks) are almost never seen during normal diving. In fact, during 42 years of diving off SoCal, I have had only one unplanned shark encounter, which was with a blue and occurred about 30 years ago off Wilson Rock, a series of pinnacles 2.2 miles off San Miguel Island. In order to be assured of seeing blues it is necessary to go to the offshore places they are known to frequent and chum the water to attract them.
I’ve made several blue shark trips. I recorded what happened on my blue shark trips and will relate that here, because I think it reflects behaviors found in many pelagic sharks.
Blues seemed curious in the morning, swimming in a leisurely, nonaggressive manner and coming right up to divers to check them out. If they bit anything it was as if they were tasting it, which they probably were. I found it interesting to watch the nictitating eyelid roll over the eyes to protect them when the shark bit down.
Blues are nocturnal and there was a noticeable change in their behavior around three o’clock in the afternoon. They became markedly more aggressive, swimming faster and definitely feeding, not just tasting. If there were more than two sharks, they competed for the food. The shark cages we used were tied off the stern and totally submerged. We had to jump into the water, swim about 10 feet, open the door, climb inside and close the door. On one occasion, while alone in a cage, I watched a diver jump in. He and I were the only divers in the water and three sharks that acted like a pack of dogs immediately surrounded him, swirling around and around him and nipping at his heels. He used a stick to fend them off but quickly discovered he could not keep track of three sharks and returned to the boat. Not much later, two divers entered the water, stayed close together, and were able to make it to the cage easily using their sticks. There definitely was safety in numbers.
The skin of female blues is more than twice as thick as that of males, probably because the males hold onto the females during mating by biting them. According to Sharks in Question, The Smithsonian Answer Book, one can readily identify the sex of a blue shark solely from the presence of mating wounds. Underwater, divers quickly learn to tell the sex of blues (and other sharks) by the presence or absence of claspers. These rod-like structures are inserted into the female’s vagina and transfer sperm to her during mating. Males have two claspers, one on each pelvic fin.
Female blues carry their young for 9 to 12 months before giving birth to litters containing from 4 to 135 young. The newborn sharks are about 15.5 inches long. In appearance and behavior, they are miniatures of their parents.
Blues grow to a maximum length of about 13 feet and can weigh more than 400 pounds. They may live 20 years. From my observations I believe the larger they are the more fearless they are. By the time they are eight feet long, they truly are masters of the sea.
Although blues usually swim near the surface, tagged blue sharks have been known to dive deeper than 2,600 feet. They are wide ranging. One tagged blue swam from New York to Brazil in 16 months, traveling 3,740 miles. Another swam 1,716 miles in 64 days, averaging 26.8 miles per day.
Blues feed on small fishes, krill and squid. They also eat small sharks, sea birds and dead mammals. Blues in turn are preyed upon by California sea lions, northern sea elephants, sperm whales, orcas and sharks that are larger than they are.
The author wishes to thank Dr. Milton Love, author of Certainly More than You Want to Know About the Fishes of the Pacific Coast, for his help in the preparation of this article.
Blue Shark Stats
Phylum: Chordata
Subphylum: Vertebrata
Superclass: Pisces
Class: Elasmobranchii
Order: Carcharhiniformes
Family: Carcharhinidae