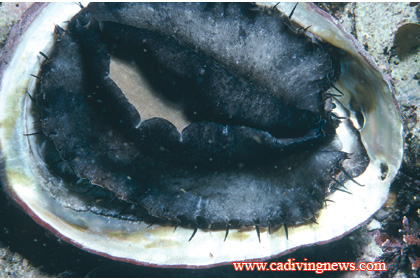 Diver’s Guide to Abalone Biology – With Hints for Better Hunting

By Bruce WatkinsDecember 8, 2008No Comments

Each April abalone season reopens and divers flock to the sea to satisfy their craving for this tasty treat. Abalones are complex creatures, and this complexity has spawned a set of complex regulations. What follows is a short description of abalone biology with emphasis on what divers need to know to better understand their quarry, be better hunters, and to better understand the rules they must follow.

Abalones are mollusks—non-segmented invertebrates with a mantle, gills, a rasping tongue, and a muscular foot. Abalones are further classified into the class called gastropods, which includes, snails, slugs and nudibranchs. Abalone and snails possess a single shell, which distinguishes them from other mollusks that have multiple component shells (chitons), two shells (clams, scallops and oysters), or no shells (octopus and squid). The most distinct feature of the gastropods is they all undergo a process called torsion. During development their body twists around 180 degrees counter-clockwise such that the anus moves into a position directly over their head. Abalones defecate on their own head.

As you clean your abalone it easy to imagine why they are called gastropods, meaning stomach footed. Most of the animal’s weight within the shell is its large, mushroom-shaped muscular foot. It allows the abalone to crawl about, sometimes at an astonishing speed (for a snail), and it also creates a vacuum to hold the abalone to its rock. (Hint: you do not pry an abalone off a rock; you simply break the suction.) However, the large gland surrounding the foot is not its stomach, it’s the reproductive gland. There are boy and girl abalone; the boys have cream-colored glands and the girls are green or blue-green.

Abalones are broadcast spawners and many individuals simultaneously release eggs and sperm into the water. Small abalone may release a few thousand eggs, larger ones over five million. Red abalone normally begin to spawn when they reach five inches and are four years old, while a legal seven inch abalone may be twelve years old. There is a size limit to allow an individual a number of seasons to spawn before they can be taken. It is an urban legend that the season closed in July because that is when abalone spawn. Fact is abalone spawn year around in Northern California. Normally the seas are calm in July, and California Fish and Game has decided to give the abalone a break for a month.

All abalone are grouped into the family Haliotidae, in which there is one genus haliotis. There are approximately 130 species of abalone. Biologists are have been unable to precisely determine the number of species due to interbreeding. We Californians are lucky to have the largest abalone in our waters, the red abalone, Haliotis rufescens, and this is the only species that may be taken in California waters. John Pepper holds the world record with a 12.33-inch monster.

Abalone shells are beautifully colored. They may be polished to show off their multi-colored swirls, or cut and polished for jewelry or to inlay tabletops or guitars. Remember that the dust from an abalone shell is toxic and a dust mask should be used to prevent inhalation of the dust while cutting or polishing shells.

Abalones have a two-chambered heart, blue blood based on hemocyanin. and no mechanism to clot blood. They are hemophiliacs. 100 percent of abalone cut deeper than one-half inch will die, and 50 percent will die if cut between one-eighth to one-half inch. (Hint: do not cut an undersized abalone as you remove it; it will bleed to death when replaced.) This is also why the size and shape of tools to remove abalone are regulated and very specific—to minimize cutting and killing undersized abalone.

Abalone are not particularly intelligent animals, they do not have a brain or spinal column. They do have eyes on stalks, and their mantle is sensitive to water movement. They instinctively avoid light, and will suck hard to a rock if disturbed. (Hint: look for abalone out of direct sunlight back in cracks and under ledges. As you approach an abalone, try not to cast a shadow across it or fan the water near it.)

Young abalone feed on bacteria, diatoms and coralline algae. Abalone larger than two inches feed on drifting kelp, and almost exclusively on brown kelp. Abalone do not move around much, but they do move. They are mostly nocturnal, and forage at night and return to a scar (an area the abalone cleans of marine growth), but not necessarily the same scar they spent the previous day at. Abalones also migrate to follow the seasonal availability of their food. They move to deeper water during spring and summer, then to shallow water in the fall and winter. (Hint: if you cannot dive very deep, try hunting late or early in the season.)

Fortunately, these tasty delicacies are very plentiful in Northern California, and will continue to be so as long as divers follow the rules. Abalone may be taken only north of San Francisco. Abalone must be at least seven inches long, daily possession and bag limit is three, with an annual limit of twenty-four. Remember, breath-hold diving only, no scuba, and each diver must have their own abalone iron and measuring devise with them in the water. You must have a valid California sport fishing license, an abalone card and, new for 2008, your must tag your abalone. Divers should familiarize themselves with the complete set of Fish and Game rules before taking abalone. Happy hunting!