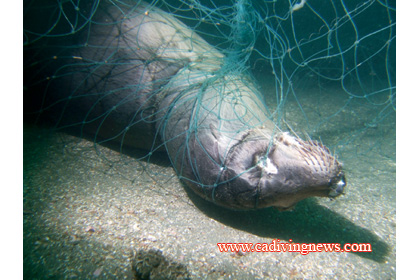 By Phil GarnerDecember 9, 2008No Comments

As an avid wreck diver, I am always interested in finding new wrecks. My buddy Ross Overstreet is the same way. In December he was scouting the Huntington Flats area and found a promising site. When he dropped down, he soon realized it was not going to be an exploratory dive. The visibility was limited and there was plenty of surge, even at 95 feet. His anchor was fouled in a monofilament net. He worked furiously to free the anchor, seeing firsthand how easy it is to get tangled in the web. As he looked around, he saw a couple of sea lions caught in the gillnet. The bottom was littered with carcasses and bones of other victims. Disheartened, he vowed to return and disable the net so it couldn’t continue to kill indiscriminately.

The following week he assembled two teams of three divers. Our plan was to bundle and tie the abandoned gillnet. Team One aboard the Big Easy (myself, Merry Passage and Marc Bacon) dropped on another net nearby, a trawl net covering a small section of the reef. As I pulled the snagged net free from the rocks and cut away the pieces hopelessly tangled, Marc attached a liftbag to the net. When it was free of the reef we raised it to the surface. Meanwhile, Team Two from the Orion III (Ross Overstreet, Jeff Shaw and Elaine Jobin) discovered the monofilament net was taller and much longer than we could handle. After surfacing, we regrouped and made plans to document the net with photography instead.

One team searched the net and found dozens of dead animals as far as they could swim. Merry cut a large sheep crab free from an imminent death. I swam a short distance to an end of the net where I found 6 dead sea lions in a span of less than 50 feet.

When I got home I posted my pictures on various dive boards and was deluged with offers to help. Not wanting to put any more recreational divers at risk I made contact with Kurt Lieber of the Ocean Defenders Alliance. He scheduled a trip with the assistance of the Coast Guard to retrieve the net. The Coast Guard turned the project over to the Department of Fish and Game, who said they would go out the next day and evaluate the situation. They found the net and pulled it up a couple of days later.

Dozens of divers, Ocean Defenders Alliance and United Anglers of Southern California came together to spread the message about the danger of gillnets and trawl nets abandoned in our near shore waters. Unfortunately, any time we visit the local shipwrecks and oil rigs in the Huntington Flats area we still see black flags everywhere. Some may be legal, some not, but the lost and abandoned nets continue killing for years unless they are removed from the sea.