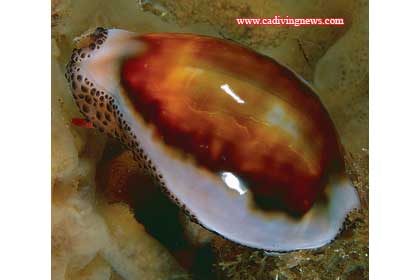 By Bruce WatkinsAugust 17, 2011No Comments

Some shells must be cleaned and polished to reveal their jewel-like qualities, while others are perfect gems just as they are found in the ocean. One of the most beautiful shells found in California is the chestnut cowry, and this shell needs no work to show off its inner beauty. Cowries, in general, and chestnut cowries, specifically, have such stunning beauty that they are both enjoyed by divers and prized by collectors.

The chestnut cowry is found from Monterey to Isla Cedros, Baja California. They have always been more common in Southern California, but in recent years there seems to be a surge in the population in Monterey and Carmel Bays. Cowries are found on rocks, and usually within kelp beds from the intertidal down to about 150 feet.
Chestnut cowries can grow to a length of about three inches, although most of the specimens that divers find are around two to two and a half inches. Their retractable mantle, when exposed, is orange-brown with black dots, and their smooth shell is a beautiful chestnut brown on top and bluish-gray to tan on the sides. The bottom and the “teeth” of the shell are colored cream to white. Their brightly polished shells make them particularly easy to locate and identify.
Cowries are classified into the Phylum Mollusca–animals with soft bodies and normally hard shells. They belong to the Class Gastropoda, meaning stomach-footed–although based on anatomy they should have been named reproductive organ-footed. They are further classified into the Order Sorbeoconcha. This is a very large taxonomic order of marine snails, although a few live in freshwater.
Within the Order Sorbeoconcha, all cowries are found in the Superfamily Cypraeoidea–cowries and cowry-like animals. This superfamily contains the families Cypraeidae–the true cowries, and Ovulidae–the egg snails. Most cowries are found in tropical waters and the chestnut cowry is the only true cowry in California waters. The scientific name for the chestnut cowry is Neobernaya spadicea (previously known as Cypraea spadicea) and translates to, not surprisingly, “chestnut colored.”
All cowries have smooth, shiny shells. Their mantle continually deposits new shell material on the outer part of their shell, while they continually adsorb the inner part of their shell to allow their bodies to grow. This keeps the outer shell clean and polished and free of marine growth. Like most cowries this one is nocturnal and omnivorous, preferring to dine on sponges, anemones, tunicates, snail eggs and other small, sessile animals.
Chestnut cowries have sexual characteristics common to most gastropods–there are boy cowries and girl cowries. While there is a great deal of diversity on how gastropods procreate, cowry eggs are fertilized internally. In Southern California chestnut cowries mate in July, and lay eggs in pointed capsules that may contain 800 eggs. Unusual for invertebrates, the parent actually protects their eggs until they hatch after about three weeks. The cowries’ larvae are planktonic, and drift with the currents until they find a suitable reef to land on. They then begin to lay down a shell and begin to look like tiny versions of their parents.
The chestnut cowry’s worst enemy is the uninformed diver or tide pooler. They are so beautiful that many have the uncontrollable urge to collect them. However, unless you have a valid collector’s permit it is illegal to collect cowries (except empty shells). Your sport fishing license only allows you to harvest game animals, and cowries are not listed by the California Department of Fish and Game as game animals. Like most marine life these gems are best enjoyed in the ocean and not in an aquarium or display case.