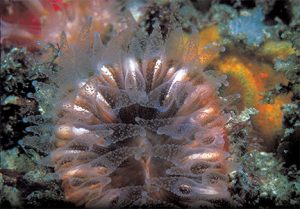 It’s a fact stranger than fiction: there are underwater creatures commonly found in the Pacific Ocean off the California coast that are biologically classified as “flower animals.” The class is Anthozoa, formed from two Greek words, anthos, meaning “flower” and zoa, meaning “animals,” and it contains the stony corals.
Anthozoa is a class within the photogenic phylum Cnidaria (the “C” is silent), which means “nettle” in Greek. Besides corals, phylum members include sea anemones, sea pens, gorgonians, jellyfishes and hydroids. Cnidarians have two forms, polyps and medusae. Medusae (i.e., jellyfish) are unattached, upside down versions of polyps. Polyps are attached to a surface on one end by the pedal disk, while the oral disk at the other end is unattached and ringed with tentacles. Stony corals are always polyps, albeit polyps that have secreted a limestone skeleton.
Many stony corals are as colorful as terrestrial flowers. As we have learned from other underwater creatures, beauty often means, “predator beware.” This is true of stony corals. They have weapons — stinging cells called nematocysts — to fend off unwanted attention. The nodules that contain the nematocysts can be seen on the translucent tentacles of the corals depicted here. The nematocysts are also used to capture food. Stony corals are carnivorous and their diet includes small animals and organic particles brought to them by the currents.
Anthozoa is subdivided into two subclasses that concern polyp structure: Octocorallia (formerly Alcyonaria) have eight tentacles and eight mesenteries, i.e. body partitions, while Hexacorallia (formerly Zoantharia) have six or more tentacles and mesenteries but never eight. Anthozoans are abundant and more than 6,100 species have been described. Of these, approximately 4,300 are Hexacorallia. Most are colonial. The four corals discussed here are Hexacorallia as well as members of the order Scleractinia, which includes coral reef builders. Two of the corals are solitary and two are colonial. The common names of the latter two are nearly identical and you’ll need to refer to the scientific names to keep them straight.
Most stony coral colonies consist of genetically identical polyps, which may release sperm, eggs or both. After they are fertilized in midwater, planula (larvae) hatch from the eggs and drift with the currents before settling down on the substrate and morphing into adults. Some stony corals also reproduce asexually by budding. The solitary orange cup coral shown here has a unique method of reproduction that is described in the section about it.
Stony corals have partitions in their cups called septa, which can be seen in some of the photos here (look for white ridges in the rims of the cups).
While some stony corals have a symbiotic relationship with a type of algae called zooxanthellae, the four discussed here don’t and can live in deeper waters where there is no sunlight.
Brown cup coral (Paracyathus stearnsii): Brown cup corals are found in depths from 65 to 440 feet, from British Columbia to the Sea of Cortez. They can be three-quarters of an inch in diameter. The sexes are separate and spawn between February and May. These corals have been known to live more than 40 years.
Orange cup coral (Balanophyllia elegans): This abundant solitary species is found off the West Coast from Canada to SoCal in depths ranging from the low intertidal to at least 1,665 feet. In shallow water it lives where there is no direct sunlight. Since the color is a fluorescent pigment, these corals remain a vivid orange no matter how deep they are, making them easy to find. Each Balanophyllia elegans polyp has a cup-shaped skeleton less than an inch in diameter. The oral disk is ringed by 36 translucent orange tentacles. The sexes are separate. The eggs are fertilized internally and when the larvae hatch, they remain in their mother’s body cavity until they are about .07 inch long. Then the tiny flat orange larvae leave their mothers and settle on the substrate where they morph into polyps. Judging from my photos, like human children the larvae sometimes travel quite a distance from their mothers, sometimes they settle down right next to her. Predators of orange cup corals include the leather sea star Dermasterias imbricata.
Colonial cup coral (Coenocyathus bowersi): Colonial cup corals are found off the West Coast from Monterey to Baja, including the Sea of Cortez, in depths ranging from 30 to 490 feet. The colors include shades of orange and pink. Colonies can be six inches wides and three inches high and prefer to live in shaded areas such as the undersides of reefs and in caves.
Cup coral (Astrangia haimei, formerly A. lajollaen): These cup corals are colonial and have a very wide range. They are found from Monterey to Peru, including the Sea of Cortez, in depths from 3 to 173 feet. Colonies encrust rocks and bivalve shells. The largest colony reported was nearly six feet in surface area though they are usually much smaller. The orange polyps are less than one-quarter inch in diameter and height, and the tentacles are translucent. Colonies living in the northern part of the range are considered hardier than those living farther south. Based on the rate of budding that would result in a colony about four feet in area, that colony could be 46 to 383 years old.
Sea anemones are known to wage war not only with predators but also with anemones unlike themselves. At least some of their close cousins the stony corals exhibit the same behavior. Scientists have discovered that while the brown cup coral Paracyathus stearnsii tolerates having the cup Astrangia haimei nearby, it will fight with orange cup corals Balanophyllia elegans and strawberry/club-tipped anemones Coryna coral ctis californica. And, while Corynactis retreats from Paracyathus, it will attack adjacent Astrangia and Balanophyllia.