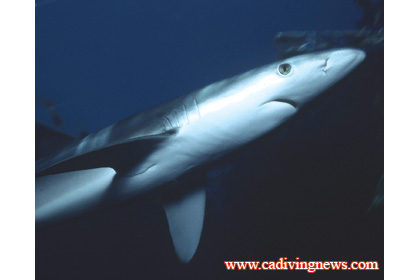 California divers have the opportunity to encounter numerous species of shark in our near shore waters. While only a very few are regarded as dangerous, most are beautiful and are a joy to encounter in the water. Of all our sharks, the blue shark may be the most elegant. They move in a relaxed, confident manor as their long tail propels them forward with graceful strokes. Blue sharks are nothing short of poetry in motion.

Blue sharks are classified into the class Chondrichthyes and the subclass Elasmobranchii—they are fish with a skeleton composed of cartilage instead of bone. They are further classified into the order Carcharhiniformes (ground sharks, the largest order of sharks including cat, hammerhead and hound sharks) and the family Carcharhinidae (requiem sharks). The requiem sharks are a family of migratory, live-bearing sharks of warm seas and include the tiger shark, bull shark, and lemon shark. All have nictitating eyelids, five gill slits, and two dorsal fins. The name comes from the French word for shark, requin. The overall appearance of requiem sharks is “classic-shark-like.” The blue shark was originally named Prionace glauca by Linnaeus in 1758. Prionace is derived from the Greek, meaning saw point, while the species name glauca is derived from the Latin term “glaucas” meaning bluish gray or green.

Blue sharks are pelagic and are found throughout the world’s oceans. They prefer water deeper than 200 feet and 60-68 degrees F, and are not found in the polar or very warm bodies of water. They have classic counter shading—the top of their body is deep blue with a white belly. They are hard to confuse with other sharks due to their blue color, elongated snout, and larger-than-average pectoral fins. Blue sharks are known to migrate long distances, sometimes traveling more than a thousand miles in a year.

Sharks play rough and a male blue shark will control a female by biting her behind the head. Like most adult sharks, blues can be accurately sexed according to the presence or absence of bite scarring. Blue sharks have adapted to this foreplay, and females have skin three times thicker than males. Blues give birth to fully formed young sharks, usually 25-50 pups are born per litter, but up to 135 have been reported. Their gestation period lasts 9-12 months, and the pups measure 18 to 23 inches at birth. The largest recorded blue shark is 12.5 ft weighing 861 pounds, but 6-foot animals weighing 70 pounds are more common. Maturity is reached at about 6.5 feet.

Encounters with blues in the wild are memorable. Blues normally move in a slow, graceful manor, and rarely move fast or jerky. They are often very curious about divers, especially if there is a bit of fish scent in the water. A blue shark’s teeth are membrane mounted and, unless they are feeding, they are folded back giving them the appearance of grandpa without his dentures.

Blues mostly feed on squid and small fish, and have few predators —California sea lions and larger sharks including the mako and the white shark. Blue sharks rarely attack humans. Conversely, humans do take their toll on them.

Blue sharks were once common throughout California’s waters, but sadly they are becoming very scarce. In the 1980s it was common to attract a hundred sharks during a cage diving trip; now, nearly all of the California sport blue shark diving has stopped due to the scarcity of sharks. Blue sharks are the most commonly caught sharks in the world, but they are rarely caught intentionally. They are by-catch from long line fishing for tuna and swordfish. Their fins may end up in shark-fin soup, but most end up on the sea floor to rot.

Should you run into a blue shark on a cage diving trip or when open water diving, try relaxing and enjoy the encounter. If you are lucky they will approach close to get a good look at you and giving you a better look at them. I have always considered blue sharks to be the Labrador retrievers of the sea—beautiful and harmless.