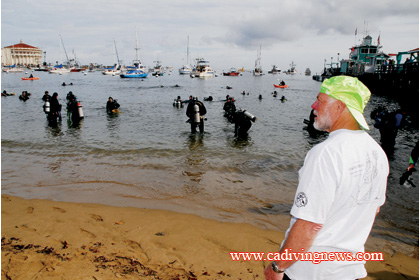 By California Diving NewsDecember 11, 2008No Comments

Despite weather forecasts to the contrary, Saturday, February 23, dawned bright and beautiful as hundreds of divers descended upon Avalon for the 27th Annual Underwater Harbor Cleanup, sponsored by the Catalina Conservancy Divers and the Catalina Hyperbaric Chamber. While the skies were bright, the visibility in the water was not, and many divers had to cut their dives short because they either lost their buddies or because they literally could not see their hands in front of their face, let alone find and trash to bring up.

But that didn’t mean good things weren’t found. The unique find of the day probably went to Mark Blackwood who came up with what first looked like a set of chicken bones but which was later discovered to be a racing pigeon that met an untimely demise. Mark found an intact pelvis with the leg bones and feet still attached, with bands around the feet. A phone call to the number on the bands (in Long Beach) gave the full story.

The event is a fund-raiser for the Conservancy Divers and the Chamber, and the lack of viz also meant a relative lack of trash coming up, which just means there will be that much more to find next year. Mark your calendar for February 21, 2009.