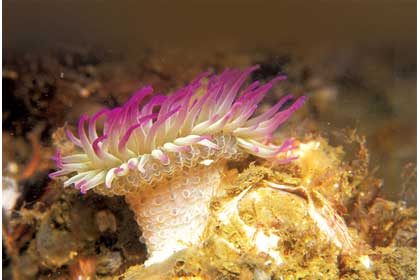 Aggregating Anemones: Gangsters of the Sea?

Imagine what Hollywood would do with a film about anemones. Take aggregating anemones for example. They are relatively small, but these carnivores are well armed and can be surprisingly aggressive toward their neighbors, so you might imagine they’d be cast in a gangster movie — with lots of special effects like fiery explosions and crash scenes. Their tentacles can fire venomous miniature harpoons that repel potential predators including anemones unlike themselves. Mother Nature is perfect for the “good cop” role of peace negotiator. In real life, there is a natural order; neighboring colonies created of different clones of the same species as well as those of different species establish “demilitarized zones” to minimize the energy they have to expend to establish and maintain their turf.

Unfortunately for Hollywood’s bottom line, but luckily for us, sea anemones, including aggregating anemones, are not dangerous to divers. Their tiny harpoon-like nematocysts cannot easily penetrate deep enough into our skin to deliver significant amounts of toxin and engage our pain receptors.
Simple, but Surprising
Like all anemones, aggregating anemones are members of the phylum Cnidaria, a word derived from the Greek word meaning “nettle.” The phylum name is pronounced ni-DARE-ee-uh (the “C” is silent). Other members of the phylum include corals, sea pens, gorgonians, jellyfishes and hydroids. All are equipped with stinging nematocysts that are used for defense and catching food, and this is the distinguishing characteristic of the phylum. In addition, all cnidarians are carnivorous.
There are two cnidarian forms, polyp and medusa. As described in the book The Shape of Life, these forms are “essentially mirrors of each other.” Polyps (i.e., anemones) are attached to a surface on one end of their body by their muscular pedal disk, while the oral disk at the other end is unattached and ringed with tentacles. Medusae (i.e., jellyfishes) are unattached, upside down versions of polyps. Sea anemones are always polyps, though the life cycles of some of their closely related cousins include both polyp and medusa stages.
For animals that are considered “simple,” sea anemones are surprisingly complicated. And, writing about sea anemones is rife with pitfalls. Taxonomic names and classifications continue to be debated and change constantly. Try to identify many species and you will be confronted with several names for what may well be the same. There are anemones that look so much alike only lab work can determine who’s who. The body color of same-species animals can vary widely.
Underwater Gangs, Turf Wars
Detailed information on many species of sea anemones is hard to come by. I chose to feature the aggregating anemone, Anthopleura elegantissima, because it is the most abundant anemone found on the reefs along the California coast and it is a relatively well-studied species. Although this species of aggregating anemone lives on reefs as deep as 60 feet, colonies also exist in tidepools and on rocky shores, where they are out of the water during low tides. This makes A. elegantissima easy for researchers to collect. These anemones also do well in aquariums, a trait that helps make them a good subject for researchers.
While solitary A. elegantissima do exist, the animals usually crowd together in gangs called colonies. A single colony always contains genetically identical, same-sex clones. Thus, colonies are separated by sex, a trait that makes cloning vital to their reproductive strategy.
Besides cloning, aggregating anemones also spawn, with males and females releasing eggs and sperm into the water. When a fertilized egg hatches it releases a free-swimming larva that has a flat, oval body. After several weeks, the larva settles down on the bottom and morphs into a polyp. Due to their ability to clone themselves, it only takes one aggregating anemone polyp to start a colony.
Colonies from different genetic stocks are enemies. When two aggregating anemones from different genetic groups come in contact, you can expect “turf wars” — they inflate their white fighting tentacles (normally retracted at the base of the colored tentacles) and fire poison “darts” at each other. When an injured anemone withdraws the act leaves a clearly visible “demilitarized zone” behind.
The particular species of symbiotic algae living in an A. elegantissima determines the anemone’s color, which ranges from olive to bright green. The tips of the tentacles can be pink, green, lavender or blue. Individuals living where sunlight doesn’t penetrate lack algae and are pale yellow to white.
The multi-purpose opening in the center of the oral disk is used to ingest food, eliminate waste and release eggs or sperm during spawning. The diet of aggregating anemones includes mussels, acorn barnacles, crabs, isopods, copepods, snails and chitons.
The oral disk is supported by the body column, which is covered with numerous sticky bumps. Small debris such as sand and pieces of shells adheres to these bumps, thus providing a partial hard coat that helps protect aggregating anemones when they are out of water at low tide.
A. elegantissima is preyed upon by at least one species of nudibranch, pleurobranch, sea star, shark and fish. In the effort to deter predators the anemone will first fire its nematocysts. If that doesn’t work, the animal will try to crawl away (this must be painfully slow) or will detach its pedal disk from the bottom and float away. While aggregating anemones are considered to be sessile organisms, this doesn’t mean they are stuck in one place all of their lives.
As I stop and think about it, I don’t think there is anything that anyone in Hollywood could do to improve upon Mother Nature’s version of aggregating anemones. See these colorful jewels underwater and I am confident you will feel the same way I do.
Aggregating Anemones  Stats
Phylum: Cnidaria
Class: Anthozoa
Order: Actiniaria
Family: Actiniidae
Genus/species:
Anthopleura elegantissima
Oral disk diameter:
slightly less than 2.5 inches
Number of tentacles: About 100
Reproduction: Cloning and spawning
Range: Alaska to Baja California
Depths found: Shoreline to 60 feet
Spawning season: Late summer/early fall