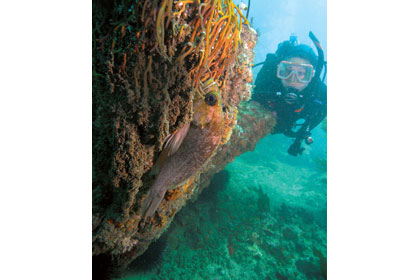 Writing articles for this column motivated me to sort my thousands of California marine life images into specific folders such as bryozoans, hydrocorals, crabs, fish, nudibranchs, etc. Nudibranchs are further separated into aeolid and dorid folders — including 40-plus “yellow dorids.”

In the beginning, all of my yellow dorids looked alike to me. However, as time went on, I became more adept at recognizing the subtle differences among the colorful slugs.
There are more than 170 species of nudibranchs living off the Pacific Coast and many of them are found in SoCal waters. Closely related to the land slug, nudibranchs (the name means “naked” gills) are members of the Phylum Mollusca, Class Gastropoda, Subclass Opisthobranchia and Order Nudibranchia. The vast majority of nudibranchs (18 families) are classified as Doridacea and commonly called dorids.
Several features identify dorids. The branchial plumes (gills) that circle the anus on the animal’s back can be one of three types: unipinnate, shielded or tripinnate. The plumes further lead to classification as cryptobranchia (retractile gills), phanerobranchia (rigid, non retractile gills) or porostomata (retractile gills, small head with no tentacles, radula or jaws).
Dorids typically have a mantle, a foot, oral tentacles and two rhinophores. Behind each rhinophore is a tiny and often invisible eyespot. These sense only light and dark and it is the oral tentacles (sensitive to touch, taste and smell) that help the animal navigate as well as find food and perhaps a mate. There are several types of chemical-sensing rhinophores and they differ with the species. Some dorids can retract their rhinophores to protect them.
Nudibranchs are carnivores. Most opisthobranchs and all dorids except the porostomata have a ribbon of chitinous teeth called a radula. The shape and number of rows of teeth on the radula are specific for each family/genus and are adapted for grazing on a particular prey. Most dorids seem to prefer sponges though at least one genus (Triopha) eats bryozoans.
Many marine creatures are hermaphrodites and nudibranchs are no exception. Having both sexes in one body increases their chances of reproducing because they can mate with any member of their species they come across. The male organ is stored in a sac on the right side of a nudi’s head, next to a rhinophore. The female port is just above the mid point on the right side. Nudis truly “hook up.” They position themselves right side to right side and head to tail so that the male organs align with the female ports. After mating, both animals lay eggs. All dorids lay egg ribbons (not strings) that have one edge attached to the substrate. Each species’ ribbon is unique.
Unfortunately, some of the nudibranchs described here have had several different scientific names. Sorting them out has left a lot of names by the wayside! Here, the name currently used by the World Register of Marine Species will be listed first and any other name(s) will follow it.
Diaulula sandiegensis (aka Diaulula punctuolata): This dorid attains a maximum length of four inches and can be white, pale yellow or pale brown. The number, shape and placement of the brown rings or blotches varies. The animal looks velvety because the mantle is covered with tiny, sensory, retractile tubercules that are surrounded by tiny, sharp pointed structures. The retractile gills are white and the rhinophores match the color of the mantle. D. sandiegensis ranges from Alaska to Baja and has also been found off Japan. It dines on sponges.
Doriopsilla albopunctata (aka Doris albopunctata, Dendrodoris fulva, Doriopsis reticulata): ranging from California to Mexico this dorid can be two and one-half inches long. It comes in a variety of colors: yellow, orange and brown. The mantle is sprinkled with tiny white dots and reminds me of a fabric called dotted Swiss. The spots are actually small glands. The rhinophores may be yellow or orange-yellow. The gills are white or pale yellow. D. albopunctata is also a sponge eater.
Doris montereyensis (aka Archidoris montereyensis): This is a large dorid, averaging less than two Inches in length but known to reach nearly six. Like that of most dorids, the body is round. While D. montereyensis‘ yellow mantle has dark spots (as does Montereina nobilis), they are on the tubercules, not the dorsum. D. montereyensis, which forms mating aggregates like its close cousin the sea hare, has demonstrated a dislike of light.
The diet of Doris montereyensis includes encrusting sponges such as Haliclona spp. and unlike many dorids, it cannot store the toxins of its prey. This nudi ranges from Alaska to Baja and lives from intertidal waters to depths of 750 feet. As its common name (the Monterey Sea-lemon) indicates, it frequents Monterey Bay.
Montereina nobilis (aka Anisodoris nobilis, Diaulula nobilis, Peltodoris nobilis): This is one of the Pacific Coast’s largest nudibranchs and those found in deep water can be more than seven inches long. The mantle is covered with yellow tubercules and has black or brown blotches that are among, not on, them. The retractile gills have white tips. Montereina nobilis is known as the lemon nudibranch because it exudes a lemon scent (said to be “quite pleasant”) when it is handled.
The author wishes to thank Genny and Shane Anderson for their help in the preparation of this article. They both have incredible amounts of patience!
Dorid  Nudibranch
Stats
Phylum: Mollusca
Class: Gastropoda
Subclass: Opisthobranchia
Order: Nudibranchia
Infraorder: Doridacea