Divers are familiar with bubbles, so the underwater arch at Anacapa Island should not be such a big surprise to them. But what have bubbles got to do with an underwater arch made of solid rock? Well, believe it or not, a really big bubble is what created the arch eons ago.

Much of Anacapa Island is volcanic in nature, the remnants of an ancient lava flow. And as lava goes, it was full of gas. As the molten lava solidified, the gas bubbles were trapped. While most of the millions of gas bubbles were small, some were quite large, creating cavernous weak spots in the rock walls. Eroded over time by wave action, the walls of the bubbles were eventually penetrated, forming first caves and caverns, then arches. This is why there are so many caves and rock arches at Anacapa Island, both above and below the water.

The underwater arch on the backside of the East Island is particularly spectacular. It’s in only 35 feet of water, spans some 30 to 40 feet across, and is surrounding by beautiful reef.

The arch is easy to locate, lying just out from a rock islet on the backside. The reef is relatively small, covered with kelp and located across a sand bottom. Look for the strip of kelp on the surface, and you have found it. The arch is located approximately in the middle. If you can’t find the kelp, odds are the current is running high, laying the kelp down and making the site a “no go” for diving, anyway. Be aware that strong currents can be a challenge at this site.

Currents are, however, also what make this site attractive. They bathe the reef in a constant stream of nutrients and microscopic food on which so much of the reef life subsists. This is precisely why you’ll see filter feeders such as gorgonians and corynactis anemones in abundance here. You’ll also see the occasional rock scallop.

The top of the reef reaches up to about 12 feet. The top of the arch is at 22 feet, with the bottom at 32 feet. Depending on what the seas are doing the particular day you visit the site, there may be a surge within the arch, reducing visibility and making moving about the bottom difficult. Visibility at the arch averages between 30 and 40 feet.

Inside the arch the walls are covered with corynactis anemones and encrusting sponges. Despite the abundance of fish on the reef, few reside within the arch, although on this dive you’re likely to see a few curious Garibaldi and sheephead.

A more reliable photographic model would be your dive buddy. The arch makes an excellent frame for wide-angle diver shots. Winter is best with the sun low in the southern sky. Head for the side of the arch closest to the island, and the mid-day sun will illuminate the far side of the arch and stream through the kelp, making for perfect background lighting. In addition to the arch, there is a deep overhang on the eastern ocean side of the arch. Additional wide-angle camera material exists all over the reef in the form of kelp alcoves, schools of fish, gorgonian stands, and an occasional marauding sea lion.

Macro photographers will also enjoy this site. The best (and easiest) macro subjects are the corynactis anemones and nudibranchs. Small fish subjects include a variety of gobies, juvenile Garibaldi and kelp fish. The one downside of this site for macro photography is its relative shallow depth which creates a problem with common surge.

Typical to Anacapa Island, this is not a real great site for hunting. While the site is outside of preserve areas, you’re not likely to find more than a few small lobsters. Spearfishers should look out on the sand for halibut. Sheephead and calico bass are plentiful but are also too small.

The above-water arch on the extreme east end of the island is the symbol of the Channel Islands National Park. Both the underwater and topside arches are similar in size and shape. They were probably formed in much the same way, by a large bubble of volcanic gas. It only seems appropriate that a visit to this spectacular island include also a visit to an underwater arch, paying homage to the earth’s geological handy-work by blowing some bubbles of your own.

Skill Level: All when current and surge is low.

Entry and Exit: Generally calm except when the swell is coming from the south.

Conditions: Surge can be a challenge. Currents moderate.

Hunting: Allowed but not much to take. Occasional lobster. 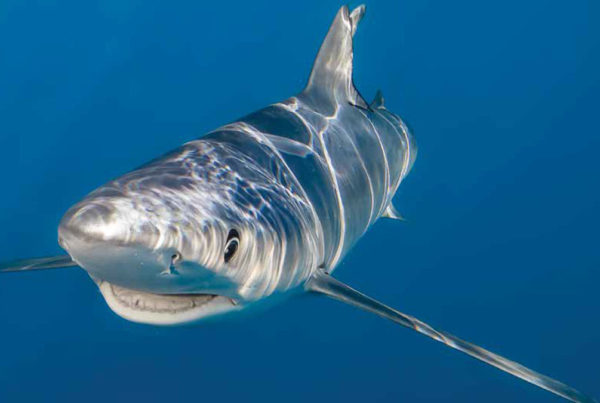