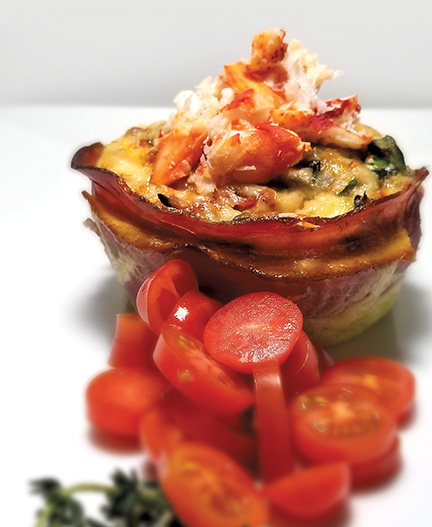 Here’s a meaty twist on the traditional quiche recipe, replacing the pastry crust with prosciutto. This recipe calls for lobster meat, but you can easily prepare this dish with lump crabmeat, or any leftover cooked meat such as diced chicken or ham. This dish is delicious served hot or cold. Get creative and experiment with your favorite ingredients.

Prepare six small ramekins or six wells of a large-cup muffin pan. Spray ramekins or muffin pan with nonstick spray and line each interior with two slices of prosciutto, allowing some of the prosciutto to overlap.

Carefully spoon the egg mixture into each cup filling two-thirds of the way up, allowing room for the quiche to rise and expand as it cooks. Top each with a sprinkle of the remaining cheese and bake in oven on middle rack until slightly firm to the touch and golden brown on top, about 25-30 minutes. Remove from oven and allow to rest for a few minutes before carefully removing to a serving plate. Garnish with a bit of fresh tomato top and a bit of diced lobster.

A crisp California Sauvignon Blanc with hints of citrus will pair nicely with Gruyere cheese and lobster alike. If you’re serving this dish at brunch, you can’t go wrong with a sparkling California brut.

Range: The California spiny lobster is found in parts of the Gulf of California, and along the Pacific coast of the length of the Baja California peninsula, extending as far north as San Luis Obispo Bay, California.

Habitat: Usually found among rocks at depths of up to 200 feet

Fishing Information: The California spiny lobster is the most economically important lobster on the American West Coast. The 2017/2018 commercial and recreational lobster-fishing season closes March 21, 2018. Lobster report cards must be returned by April 30, 2018. Visit the CA Dept. of Fish and Wildlife website at wildlife.ca.gov for more information: Source: CA Dept of Fish and Wildlife, Monterey Bay Aquarium