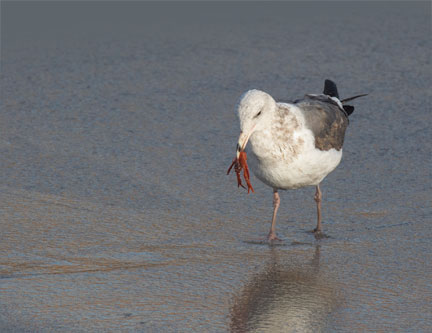 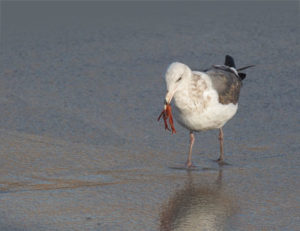 In early January, California got hit with a series of storms. With no dive lined up on a Saturday morning I needed an “ocean fix” so I drove to the beach at Casa Cove in La Jolla to check out the colony of harbor seals that inhabits the controversial area known as the Children’s Pool. Their pupping season begins in mid-December, and I wanted to see if I might be able to see and photograph a newborn pup or two.

I knew I would have to get lucky to get my desired photograph because the beach is roped off during the pupping season. But either way, I always enjoy watching harbor seals do what they do even if I have to keep my distance. So armed with a camera and telephoto lens I took up a position on the staircase above the beach.

I soon realized the beach was covered with the bodies of red crabs (aka tuna crabs). Thousands upon thousands of them had washed ashore, and their presence attracted dozens of opportunistic sea gulls that came to gorge themselves on the remains of the crustaceans.

Looking at the scene I found myself thinking about how lucky we are in California to be able to come to a beach and witness this natural phenomena. About that time I heard a loud crunching sound. At first I thought I must be very close to a sea gull that was breaking the shell of a tuna crab, but then I realized the sound was too loud. I looked toward the noise and saw a sea gull carrying a plastic bottle in its mouth.

We’re only several weeks into the new year, and nobody said resolutions can only be made on the first of January. I’d like to use this platform to remind you, and to remind myself, that we all share the responsibility to be good stewards of our oceans and this planet. There are plenty of ways to get involved, pitch in, and do our part.

If you have the time and inclination to become part of the good fight, there are plenty of ocean-oriented organizations that can use your help. If you are not sure how to get involved, try asking the folks at your local dive center. My bet is that they can put you in touch with an organization that will be more than happy to have you. Take that step and you can help make the world a better place.