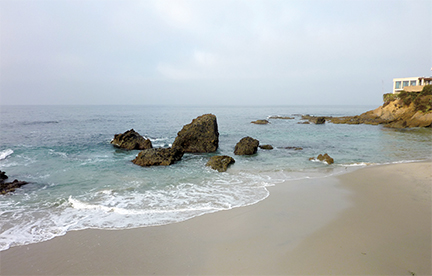 Off the Beaten Path in Laguna: Woods Cove

If anywhere along the southern California coastline can be called a Mecca for beach divers, it would be the Laguna Beach area along Orange County’s southern shores. The reasons are obvious: clear water, easy access, and an abundance of marine life that’s hard to match. It is not unusual to see a hundred or more divers assaulting the beaches here on any given weekend during the summer. Not to worry though. Laguna Beach offers enough quantity and variety of dive spots where one can obtain true submarine solitude. One of the lesser-dived locations is Woods Cove. It offers all the qualities you would expect to find in a Laguna Beach dive spot.

First, marine life is both abundant and colorful. On the rocks a colorful array of invertebrates can be found including nudibranchs, a variety of anemones, and sea stars. (Yes, the stars are making a comeback!)

The gorgonians attaching to the reef are of the golden variety. Golden gorgonian are a tougher type able to withstand the strong surges that sometimes plague coastal areas. Gorgonians are very simple colonies of tiny anemone-like creatures gathered together to form whips that can filter bits of food from the surge and currents.

Another filter feeder here is the rock scallop. You can spot them by the characteristic “smile” they display. But they snap shut quickly if frightened.

On the western reef is a small kelp forest. Here you will find some of the same critters but also a good amount of fish including opaleye, a variety of perch, and señoritas. A passing school of jack mackerel can make the dive especially delightful. You will also spot sheephead, calico bass, and, on the sand, halibut and bat rays. This is a very fishy dive.

Woods Cove is part of the long continuous string of MPA (Marine Protected Areas) guarding and preserving marine life along the entire Laguna Beach coast. This chain of MPAs along Laguna Beach and adjacent coastline are the longest string of preserves along the California coast.

Specifically Woods Cove falls within a State Marine Conservation Area. This means that nothing is allowed to leave this spot, including game fish, dead or living invertebrates, sand, rocks or shells. Do not disturb any marine life! Established a few years ago, the preserves are working and we’re starting to see a great increase in numbers and sizes of marine life in both fish and invertebrates.

Lobsters are abundant. While still quite wary of divers they seem here to come out just an inch or two closer in curiosity. Further out, near the reef perimeters another crustacean you might spot is the lowly and slow sheep crab.

Perhaps the most interesting feature of this dive spot is its bottom terrain. Two main reefs dominate the bottom of the cove. To the east, starting approximately 50 yards out is a reef made up of large jumbled boulders and rock out croppings. The rocks lie in such a way as to create large crevices, overhangs and caves. The sand bottom averages 30 to 40 feet deep about 100 yards out. There are spots where the reef reaches to the surface as much as 15 feet.

To the west is a relatively low-lying kelp covered reef with one exception; approximately in the middle of the western reef is a huge boulder that rises from the 30 foot deep bottom to within a few feet of the surface. The resulting walls and overhangs the boulder creates makes for interesting exploration.

The sand beach on the cove is divided by a large boulder formation in the middle. Beware of submerged rocks that break the surface at low tide. Surf entry during the winter is usually easy in calm conditions but during the summer, the prevailing southerly swell can make diving difficult.

The sand sometimes washes away from the bottom step making it nearly impossible to access the beach. Check it out before suiting up. Alternate dive spots are abundant up and down the coast, if conditions at Woods Cove are undesirable or if you wish a second dive at a different location.

After your dive, look into the beautiful town of Laguna Beach. Interesting shopping, excellent art galleries, and fine dinning is available in a Mediterranean-style atmosphere.

Entry and Exit: Generally easy across a sandy beach surf entry. Watch for rocks in surf. Avoid in larger surf.

Photography: Good for both macro and wide-angle.

Hunting: Part of the Laguna Beach State Marine Reserve. Nothing can be taken or disturbed.

Cautions: Watch for rogue waves. Access to the beach at the end of the steps can be tough if not impossible.

Restrictions: See the sign at the cove for specifics but basically the cove may be shut down for high surf; you must dive with a buddy. Classes restricted from June 15th to September 15th.