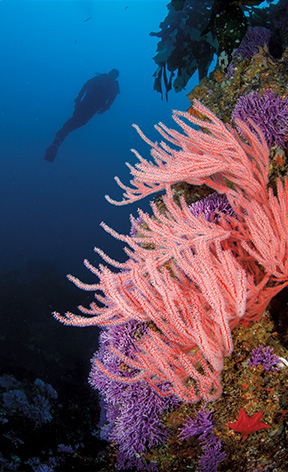 Getting Schooled as a Scuba Diver: Finding the Lesson in Every Dive 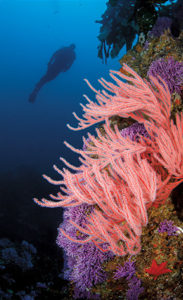 A dear friend, a diver with seven decades of diving experience, once told me something that stuck with me. “I’ve never stopped learning,” he said. “I can always get some lesson, however small, out of every dive I do.”

I surfaced from my dives with a slightly different attitude after that, always taking the time to concentrate on what I’d learned and what tiny bit would — or should — remain with me. He is right: there is always something you can absorb, no matter how ordinary the dive. And, sometimes, of course, the lesson is the most important part of the experience.

Plan B can deliver A-list experiences. Every September, my husband and I do a private multiday dive trip to Santa Barbara Island. This is one of our favorite weekends of the year and the best “date night” activity we can imagine. Santa Barbara Island, however, is only accessible when conditions are ideal, and so even though conditions are often wonderful in September, we always have a backup plan. And in 2019, with a hurricane brewing near Baja just days before our departure date, we knew Plan B was a likelihood as opposed to a possibility.

I’ve gotta be honest — I wasn’t too excited about our backup options with this particular weather outlook, which I knew might limit us to a few protected coves on the frontside of Catalina. However, it had been an exhausting, stormy summer, and I was determined to make the best of things. So, I did what any reasonable underwater photographer would do: packed gear to shoot big creatures, small stuff, and everything in between, and then got ready to roll with the punches. In this case, not only did the swell arrive right on schedule, the visibility was worsening by the minute. After one or two frustrating dives in the murk, I put away my wide-angle gear, grabbed my macro setup, and turned the weekend into a sea slug safari.

This turned out to be a fantastic decision. There seemed to be more nudibranchs at Catalina than I’d seen in years, including some of my common favorites, like tiny Doto amyra, glowing blue-and-gold Antiopella barbarensis, and some outlandishly fat Hermissenda opalescens. I didn’t even care that much when the weather worsened further, adding wind to the already-present swell. Late one afternoon, I was descending near our protected anchorage at Two Harbors when I caught a brief glimpse of an unfamiliar egg mass on the shifting kelp leaves below me. I immediately dropped down and began inspecting the leaves, and when I found the source of the eggs, I almost dropped my camera: a Babakina festiva!

Nudibranch nerds will immediately recognize this species name as a reason for jubilation (for the less geeky, let’s just say it’s an exciting critter to find anywhere in Southern California, much less on an unnamed dive “site” that doesn’t exist on any map). This petite, pastel beauty is as lovely as it is uncommon; I’d seen only a single example very briefly in my years of diving California, and that was several years before. I whooped into my regulator, took a kazillion photos, and then signaled my husband to show him my find. He’s not as much of a sea slug fiend as I am, but even he recognized it as something uncommon enough to warrant an intensive photo session as well.

We returned to the same site early the next morning, anxious to see if we could find the Babakina festiva again. Much like our original dive plans, the creature had disappeared, leaving us to search for a new photo subject — perhaps something unexpected and better than we could have imagined.

You’re never too experienced to do something (extremely) stupid. I’ve been diving for almost 30 years, a stretch of time that’s inarguably long enough for a few things to have happened. It’s long enough to know that I’m a “lifer” when it comes to diving, it’s long enough to have spent obscene amounts of money on gear and dive travel, and most of all, it’s long enough to have made a few mistakes while diving. Of course, there are many kinds of mistakes, including garden-variety (kicking out from the beach to your drop point only to discover you’ve left your weights in the back of your car — did it), to mid-level (jumping in without fins — did that too). However, if you dive enough, you’re likely at some point to do something that reminds you that the ocean owes you no favors, no matter who you are or whether you’ve paid tribute to it for decades.

For me, it happened on a stunning July morning a few years ago during a dive trip to Farnsworth Banks. I’ve dived this site more than 100 times, and it’s one of my favorites, a broad pinnacle that rises from the depths to form peaks topped with purple hydrocoral. We placed our drop line, watching the weight plummet into blue, clear water, and then our current line, which unfurled reluctantly, indicating the very mildest of surface flow.  It was official: this day had “epic” written all over it.

We geared up quickly, excited to explore the famous pinnacle. Conditions seemed so perfect that I debated whether to carry the large pony bottle that often accompanies me on deeper or remote dives, thinking about how much more streamlined I’d be without it. I clipped it on at the last minute and checked the tiny gauge attached to it to confirm it was full. My buddy and I watched one another get ready, both reaching back to ensure tank valves were on, checking our weights, and making sure our drysuit hoses were attached, and then we donned fins and strode into the water.

We dropped to about 100 feet and began exploring the deep walls, spending about 10 minutes at that depth before ascending to 75 feet. I glanced down at my wrist computer and SPG to see how I was doing on time and air, and I felt my stomach drop right into my fins.

750 PSI. I very rarely finish a dive with less than 1000 PSI, so I knew instantly that I’d made a major mistake: I’d gotten into the water with a half-empty primary air tank. I felt a tiny surge of panic, although I suppressed it quickly; if conditions held, I had ample gas in my primary tank to make a slow, cautious ascent. And if conditions deteriorated, I also had a full pony bottle and a nearby buddy. I signaled my buddy that I needed to abort the dive, and we began swimming back to the anchor line. During my ascent, the potential seriousness of what I’d done began to sink in. In my haste to get into the water, with “been there, done that” arrogance fogging my head, I had descended on of the most potentially challenging recreational dive sites in Southern California without checking my damned pressure gauge. Even worse, I had dived to 100 feet — confirming the depth on my computer — while still not bothering to glance at the adjacent tank pressure display.

A mixture of emotions washed over me, one after the other: Shame, anger, disappointment, relief, resolve. This situation was the result of overconfidence and complacency, pure and simple, and it had been entirely avoidable. As I climbed back onto the boat, I vowed to commit this day (and more specifically, how I felt at that moment), to memory so I could ensure I never did anything like this again.

It’s not over ‘til it’s over. It was an August Saturday, and you could tell. We were on a chock-full local charter boat, headed out to the HCMS Yukon, the headliner site of San Diego’s Wreck Alley. Our motley, jovial crew included wreck diving students, their instructor, some scattered technical divers, and a pair of divers visiting from the East Coast, plus us and our cameras, and so there wasn’t much deck space to spare.

Another dive boat was moored at the Yukon when we arrived, and as we tied onto an adjacent mooring we watched their passengers enter the water — 20…21…22. 22 divers already in the water, and no one from our boat had jumped yet — this wreck was going to be busier than rush hour on I-5. My buddy and I looked at one another, silently agreeing that we’d wait and enter the water last, hoping we’d at least score a few blessed, uncrowded moments at the end of our dive.

The dive itself was nothing special, with murky conditions and sparse fish life. We gamely photographed some of the wreck’s more recognizable structures for a bit, and then we headed back to the line for a leisurely ascent. The water became clearer the shallower we went, and I stared into the distance, willing something exciting to happen. After all, I’ve seen some fantastic things during safety stops, including amazing pelagic invertebrates, rowdy sea lions, and large bait balls of silvery fish.

When I saw a small grey object go flitting past us, knocking into my buddy’s fin before swimming away, I assumed it was a small harbor seal — thank you, ocean! I raised my camera and got ready to shoot a few images as it circled back around to us, but in the seconds before it decided to climb onto my camera and then onto my buddy’s head, I realized it wasn’t a seal at all — it was a ray, likely a pelagic ray. I’ve only ever seen these creatures — swimming rapidly past me at a distance, I should add — when I was offshore, in deep water, or both, so this Grand Cayman-like interaction was the last thing I’d ever have expected during my safety stop. The ray circled and approached us over and over, gently fluttering over our fins, our torsos, and our cameras. Between the creature’s close proximity (did I mention it was climbing all over us?) and our delighted laughter, it was tough to focus on photography, but we each managed to get a few clear shots. After 10 minutes of the best “safety stop” ever, the ray finally lost interest and flapped off into the blue, leaving us giggling in his wake, instilled with the knowledge that sometimes the best experiences happen late in the game. 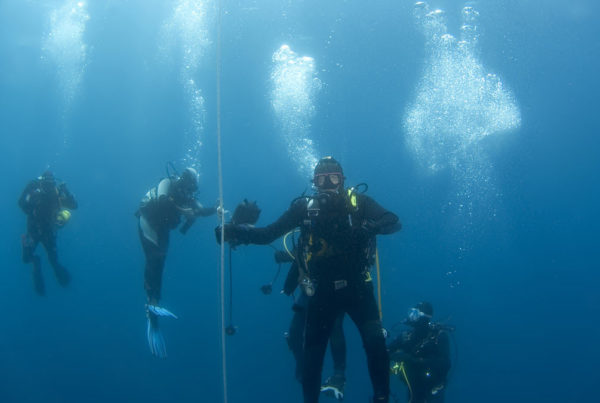 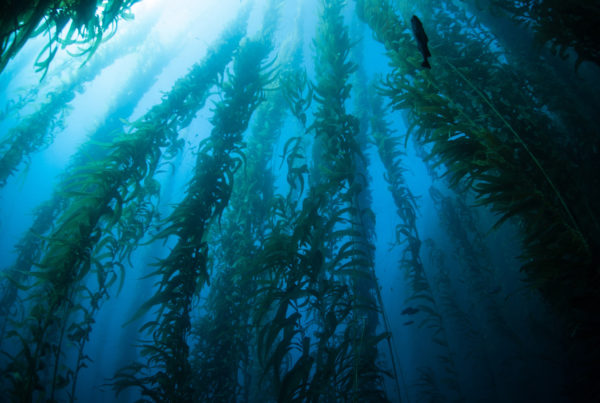 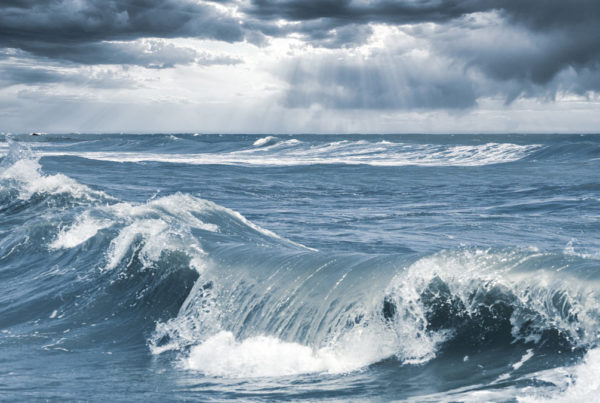