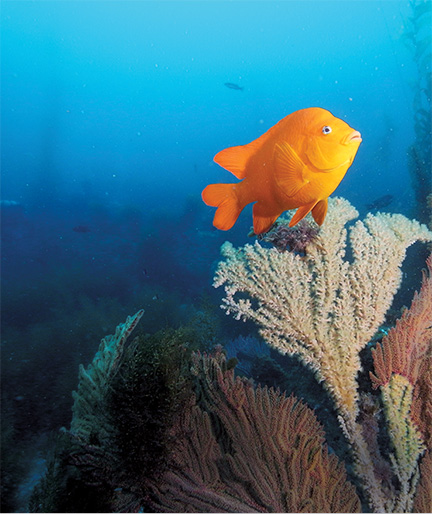 By Dale ShecklerJune 5, 2018No Comments

I’m a big fan of sea fans. If you’re like me, you’ll enjoy diving Catalina’s Stony Point, because it’s adorned with an excellent variety and healthy population of gorgonian sea fans.

First, I find them exceptionally beautifully but just as important, they don’t go anywhere. In scientific terminology, they are “sessile,” firmly affixed to the bottom — which makes them an easy photo subject. Their only motion is to sway gently in the surge and currents, quietly filtering their food from the water. They are full of color and texture. Hit them with a strobe or light and they explode in deep purples, gold and reds. Get closer and you’ll see they appear like a woven tapestry. Look even closer, very close, and you’ll see that the gorgonian is actually made up of thousands of individual anemone-looking animals known as polyps. Gorgonians are, by the way, in the same Classification of Anthozoa, along with anemones as well as corals and sea pens.

Gorgonian sea fans make for excellent photo material, especially for the beginner. Beginners can simply use small strobes and lights to highlight their color and texture. Intermediate photographers can try using them as a backdrop for a reef scene. Macro pros should scour the red gorgonian, as it’s a favorite spot for the tiny simnia snail, which feeds on the gorgonian’s polyps.

There are three major varieties of gorgonians at Stony Point. Most abundant is the brown gorgonian (actually more of a deep rich brick red). Their spans can reach over three feet. Next is the golden gorgonian, usually found near the brown. Finally, look for the red gorgonian variety down deeper. Red gorgonians actually appear pinkish when their polyps are extended.

You might see what appears to be a yellow gorgonian, but look closely and you’ll notice there are colonies of yellow Parazoanthus anemones that have take over the branches of the gorgonian.

But Stony Point has more to offer than sea fans. Although the kelp is having a tough time pushing back against the invasive sargassum weed here, it appears to be winning. The kelp at Stony Point is healthy and prolific. It’s not thick, but it does create a nice canopy with leafy stalks that can filter light in wonderful ways.

And with the kelp come the fish, a lot of them. You’ll often see schooling baitfish pass by, followed by marauding sea lions and other predatory fish. On my most recent dive several pretty good-sized calico bass tempted me to dust off my old spear gun and come back and get a nice dinner of tasty white meat. But I’m too busy with my camera …

Camera in hand I find the camouflage master, the giant kelpfish. (This particular specimen was, at just 5 inches, hardly a “giant.) I turned my eyes away for a split second to adjust my camera and it was gone, likely just tucked away under a kelp frond, camouflaged, unseen right in front of me. Rats! I hate when that happens. One of these days I’ll get a real nice kelpfish shot but this was not to be one of those days. But it was nice to see the kelp critters back busying themselves.

You can expect to see Norris’s top snails with their bright orange mantles feeding on the kelp, and opaleye, small sheephead and their wrasse relatives the señoritas, those cigar-shaped fish, spun around here and there. You might also find horn sharks and small bat rays in the shallows. Maybe even an abalone or two, too.

Within the last year the fiberglass sailboat Serendipity ran aground here and broke up on the rocks. You’ll find chunks of wreckage out on the sand near the reef along with some of the sails. Stony Point is only a short distance from the extensive and fun reefs off Parson’s Landing. The long ivory sand beach ashore invites island hikers for camping out. Snorkeling over the shallow reef sections is quite good.

While I have dived the Parsons Landing reefs before this was my first visit to Stony Point. You can bet I’ll be back.

Entry and Exit: Generally easy from boat as conditions are usually calm.

Conditions: Very good except when winds and waves from the northwest move in.

Hunting: Sometimes you might find a fair sized calico bass. Lobsters are rare.