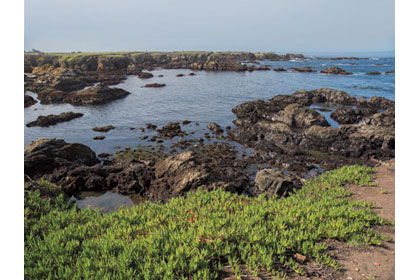 Did you ever think it would be fun to dive in a city dump? I, for one, never thought that would be either a good or fun idea. However, if you dive at Glass Beach in Fort Bragg that is exactly what you are doing. And contrary to any preconceived notions one might have, it is a fun dive.

Glass Beach is located at the north end of the City of Fort Bragg. From 1906 through 1967 Fort Bragg residents simply threw their garbage over the bluff and onto the beach. Three different beaches were consecutively utilized as the city dump. The practice ended in 1967 and the beaches were cleaned up. Organic material had rotted away and most of the metal items were removed. What was left in place were all of the discarded bottles.
Over the decades the bottles were broken and the fragments polished by wave action into half-inch sized little gems. This makes the area a very unique place to dive. Plunge your hands into the coarse beach sand and scoop up a handful of polished glass beads that sparkle in the sunlight. Look down as you snorkel out to your dive site and the ocean bottom appears to be covered in multicolored gemstones. It is like diving in a sea of jewels. The color of the bottles and resulting fragments range from clear, to brown, several shades of green, and the highly prized red glass.
For decades individuals and commercial artists collected glass here and removed a great deal of it. It is now illegal to collect glass from the most northern of the Glass Beach sites within MacKerricher State Park, and the City of Fort Bragg has recently passed a resolution to prohibit glass collection on its beaches.
There are a great many places to enter the water north of Elm Street and within the State Park. The City of Fort Bragg only allows beach access in two places — the beach at the end of Elm Street, and the stairs to the south. Fences keep people from the beach and coastal bluffs to protect nesting birds, rare plants, and archaeological artifacts. Those who hop the fence can be fined.
A series of offshore rocks create an inshore area that is rather protected from the prevailing swell. The bottom here drops off in a series of steps, and in many places there is a line of rocks that marks the boundary of each step. Thus, divers may dive in an area that is 10, 20, or 30 feet deep, and the shallowest areas are the most protected. This makes it a great place to take new divers.
The tops of the shallow rocks are covered with coralline algae, with palm kelp predominating in the 10 to 20 foot depths. In deeper water in summer the ocean’s surface is covered with a thick bed of bull kelp. The bottom consists of large, rocky depressions with a large boulders sprinkled about. You can expect to find a fair number of game fish here, but no trophies. Look for fair sized surfperch, and rockfish. Bigger fish can be found further offshore.
But divers mostly come here for the abalone. Abalones are found throughout the area, from 10 feet out to as deep as you can dive. On our last outing in April we hit a particularly calm day, so we headed out to the inshore edge of the most seaward rocks. The visibility had to be well over 50 feet, rare for the North Coast in spring. The lack of fine sand in the area means Glass Beach often has better visibility than nearby Mendocino County sites.
Abalones are common and of a respectable size. In the 30 to 40 foot range it was easy to get a limit of 9-inch shells, and they were generally in plane sight on the side of boulders. We spent some time exploring the shallows on our way back to the beach, and much to our chagrin, there were just as many large abalones at 10 feet as 40!
Visit Glass Beach for the fine abalone hunting, and enjoy the glass. What once was trash is now treasure. Today visitors are encouraged to take photographs and to leave the glass on the beach.
At-A-Glance
Skill Level: Beginner or better when conditions are calm.
Location: At the west end of Elm Street on the north side of Fort Bragg.
Access: Park in the paved lot at the end of Elm Street, and walk to numerous entries via paved paths. The offshore reefs are best dived from a boat launched from Noyo Harbor.
Facilities: Toilets at the parking area, everything else you need is a short drive to town.
Entry and Exit: Dive from one of the many beaches to the north or south of the parking lot.
Depth Range: 10 to 60 feet.
Conditions: Highly variable.
Visibility: 10 to 60 feet.
Photography: Good macro photography even on days when the visibility to poor. Great wide-angle photography when the visibility is better.
Hunting: Great hunting for 8.5- to 9-inch abalone. Fair spearfishing for rockfish, lingcod and surf perch.
Cautions: Watch for big surf, conditions can change rapidly.
← Previous Post
Next Post →