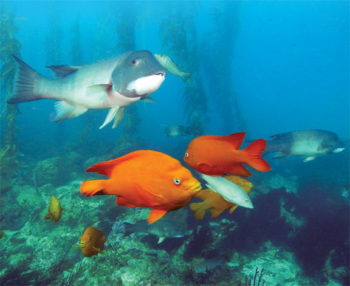 Deadman’s Reef is among the best beach dives in all Laguna Beach, perhaps all of Orange County. Blizzards of fishes swirl about and the majority of marine species common to southern California waters can be found there. Marine life rivals that of great dive sites out at the Channel Islands, and water clarity is often on par with Catalina Island.

So what’s the flip side?

You’ll have to do a bit of work to get there, as the reef is about 300 to 400 yards from shore. Yes, that’s a long swim, but just take it at leisurely pace and you will be rewarded.

Deadman’s Reef lies offshore from the secluded Crescent Bay within the southern Orange County town of Laguna Beach. As you stare out to sea from Crescent Bay, Deadman’s is to your right, past some rocks painted white by bird excrement. These are Seal Rocks, where you’ll often find sea lions.

To get there, turn off Coast Highway toward the ocean on Cliff Drive. The steps to the beach will be straight ahead. There is another access point down the street but this is farther from the beach entry for Deadman’s. Limited parking is along the street. If you find yourself shut out of parking here, head to the upper parking area along Crescent Bay Drive. There is a small set of stairs at the dead-end spur road off Crescent Bay Drive that leads to the shore access at Circle Way.

Water entry is across a sand beach. The bay is only moderately protected, so surf here is a bit higher than nearby popular dive sites such as Shaws or Divers Coves to the south. Keep this in mind when checking out dive conditions online and at the dive site itself. The surf zone is narrow but can be harsh, so be prepared to move quickly through it. Avoid diving here if surf is three feet or higher. As always on beach dives survey conditions carefully before entering the water, observing the surf height, wave interval and set timing.

While the heading out to the reef is a straight 210 degrees, you will run right into a shallow reef on the way that is difficult to pass over at low tide or even light surf. Work your way around this reef and continue outward until the inner seal rock peak lines up with the green house on the mainland. The other lineup will be 30 degrees to the stairs on the north side of the cove. This should put you on the shoreward side of the reef. While the reef covers a large portion of the bottom, some divers miss the drop zone by being too far south or not far enough offshore. An interesting guidepost on the bottom is a row of rocks that an anonymous diver carefully laid out years ago, which leads you straight to the reef. Local divers affectionately refer to this rock path as “Deadhenge.”

The mysterious Deadhenge begins at about 40 feet. Depth on the shoreward side of the reef is 45 feet and as deep as 65 feet on the outside. The main pinnacle at the center of the reef reaches to as shallow as 20 feet. This natural reef is large and full of holes and crevices and all kinds of reef surfaces for marine life to thrive.

Bright orange garibaldi dominate. Pink female sheephead are also abundant along with many juveniles of the same species. The tricolored males are making a comeback as well. Calico bass thrive here, as do barred sand bass, opaleye, halfmoons and a variety of perch. Schools of blacksmith swirl over the rocks. Groups of barracuda are frequent visitors. Giant black sea bass have been seen here. Small reef fish include a good amount of blue-banded gobies, ghost gobies, and island kelpfish.

Since 2012 this area has been part of the Laguna Beach State Marine Reserve — and it shows. Nothing may be taken.

Lobsters are coming back. Look also for sheepcrabs especially around the reef perimeters. Other invertebrates include a variety of nudibrachs, chestnut cowries, wavy turban snails, rock scallops, and keyhole limpets and gorgonian sea fans swaying in the surge. Kelp comes and goes here but is never so thick as to be impossible to pass when the forest is healthy.

Seal Rocks are nearby. These rocks are often used by sea lions to haul out and relax, so don’t be surprised if you find them occasionally cruising along Deadman’s Reef.

Leave plenty of air left in your tank for the return trip across the sand. It will make the long swim back seem shorter and you’ll get to check out the marine life of this fascinating environment. It is not unusual to see bat rays and halibut, some quite large.

If you are an avid southern California beach diver Deadman’s Reef is a site not to be missed, even if it requires a bit more work.