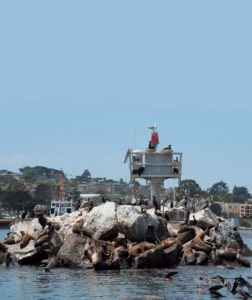 Each weekend hundreds of student divers fill the parking lots adjacent the Monterey Breakwater. While the diving at the Breakwater is quite good, particularly if you swim out past the classes, few know that better diving is found about a half mile offshore from the tip of the Breakwater. Here divers find a great expanse of rocky reef that old timers call Shale Beds or Tanker Reef.

“Shale Beds” describes the composition of the rock found here, while “Tanker Reef” refers to the spot where oil tankers from the Associated Oil Company anchored. During the early 20th century oil from wells in Coalinga was piped to Monterey, and then onto ships bound for refineries in Richmond.

Prior to the development of GPS divers referred to this huge area as one dive site. As GPS became commonplace divers “discovered” precise spots to anchor and gave many of them names. There are a number of large anchors and long lengths of chain with huge links scattered about that divers have named “Anchor Farm.” These were used to secure tankers as they took on oil. There are also a few “high spots” that are better than the rest of the reef. One of the more interesting dive sites is called Shale Island.

We all know that marine invertebrates thrive on vertical surfaces. The elevation off the bottom makes it easer for them to feed in the current, and prevents them from being covered with silt. Thus, a flat, shale bottom does not make the best home and life tends to climb to higher ground. This relief is what makes Shale Island so special.

Shale Island is a slightly raised plateau approximately 400 feet long and 10 to 120 feet wide. It rises above the surrounding 55-foot bottom from several inches in some spots to several feet in others. The GPS coordinates provided in the sidebar will put you on a semicircular area at the west end of the north side. At the northeast corner there is a large Navy anchor with a heavily encrusted chain running due south to nearly the south side of the site.
My first glimpse of Shale Island reminded me of a mesa from the Southwest — except this underwater mesa is covered with a tapestry of vivid colors including reds, oranges and yellows. The entire face of the rock has a robust population of strawberry anemones, blood stars, and sponges, and all seem especially colorful against the beige background.

The rock here is not smooth, but has numerous holes that look like they were neatly drilled. These were in fact rasped out by two species of burrowing clam — wart-neck piddocks and scaleside piddocks. The clams hold onto the rock surface with their suction cup-like foot, and use their shells to rasp out deep, and perfectly round holes in the soft shale.

We found more nudibranchs clustered together here than on most other Monterey dive sites. Most of these are dorids, but there were many different species, and many were enormous. The plentiful sea lemons were easily 8 inches long.

Among the sponges, and sometimes hiding in abandoned clam burrows were a few red octopuses. While these are normally nocturnal, they often come out on overcast days. Look for them peering out from a clam burrow or hiding among the sponges.

Shale Island is also special due to its population of unusual, tiny fish. Here photographers will find a number of yellowfin fringeheads. These are always found backed into abandoned clam burrows with only their heads sticking out. The fringeheads at Shale Island are fearless and will allow photographers to approach to within a few inches before they disappear back into their burrow.

There were a number of stripedfin ronquils resting at the base of the reef. These are also called bluebanded ronquils and are not particularly common on Monterey’s reefs, but were out in numbers last fall. There were also a large number of adolescent rockfish milling about. There were mostly browns and gophers, but there were a small group of brightly colored vermillion rockfish as well.

Shale Island is a great dive for those who like to photograph, or simply look at, vividly colored critters. It is also a comfortable, relaxing dive when the seas are up, or if you don’t want to motor too far.

Skill Level: Intermediate or better
Location: A bit over ½ mile east of the tip of the Monterey Breakwater at: 36° 36.531’ N, 121° 52.786’ W.
Access: Boats may be launched from the public ramps at Monterey Breakwater or between Fisherman’s Wharf and Wharf #2.
Facilities: None
Entry and Exit: Boat access
Depth Range: 50 to 55 feet
Conditions: Generally calm
Visibility: 15 to 30 feet
Photography: Great for macro photography of colorful invertebrates and fish.
Hunting: Game may be taken at this site, but there are few things worth hunting.
Cautions: Watch for surge and boat traffic.