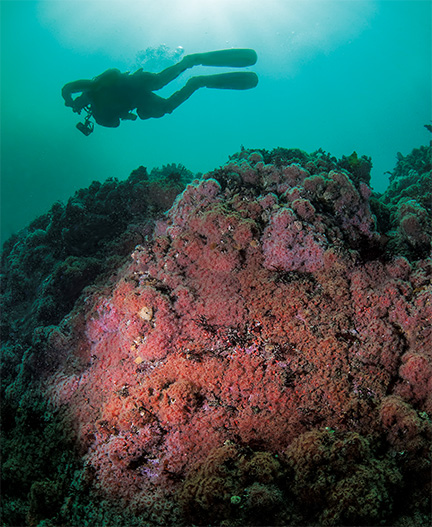 Big Fun, No Matter How You Define It: Enjoying Aumentos Reef 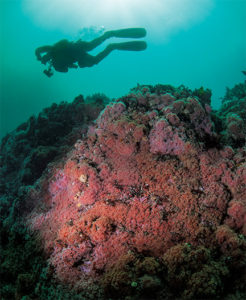 On a good day in Monterey many boat divers hope their captains head south to Carmel Bay. While Carmel does offer some of the best dive spots on calm days, some of the more exposed and more interesting Monterey sites should not be overlooked. One of my top Monterey sites has got to be Aumentos Reef.

I have heard some boat captains say that Aumentos is Spanish for “the enlargement;” however, this is incorrect. The name of this site is likely derived from one of Monterey’s first European residents. “Aumentos” first appeared on the charts from the 1857 Coast Survey. It is a corruption of “Armentas” from the rancho of Jose Maria Armenta, the original Spanish Land Grant owner of the property around Point Pinos. Aumentos Reef should not be confused with Aumentos Rock, which is also on the charts and is close to Eric’s Pinnacle. Old time divers called this “George’s Rock,” after Captain George Gregor of the Beachhopper II.

The high point at Aumentos is around 40 feet. The rock on the offshore side is a steep, granite wall that drops vertically to about 60 feet and then more slowly to 80 to 85 feet. The inshore side the reef drops off in steps to 50 to 55 feet and remains at this depth until one encounters Chase Reef. The shallow area is composed of massive, square-angled blocks that create a broken ridge top. This is a fun area to explore with deep cracks and valleys. The bottom offshore of main reef is a sand-and-rock patch reef with an assortment of steep-sided mini pinnacles that jut up 5 to 10 feet off the bottom.

The shallow rocks are covered with bright red strawberry anemones. These reproduce effectively by budding; so all the animals in one patch are genetically identical. That is why some patches are deep red, while others may be brighter red or lavender; each patch grew from one animal with genes for different colored pigments. Strawberry anemones are very brightly colored and make for great photographic subjects, either as part of a reef scene, or as individual macro subjects.

Divers should note that these anemones do not necessarily attach themselves to bare rock. Giant acorn barnacles first colonized the upper portions of the reef, and the strawberry anemones grew over the barnacles. Acorn barnacles are the world’s largest barnacle and can grow to 6 inches in diameter and nearly a foot tall.

Be sure to look on the rocky surfaces below the anemones for a cornucopia of small fish and invertebrates. On any given day divers should find a half dozen different species of nudibranchs, several species of snails, and an assortment of crabs and shrimp. There are also a number of small gobies, sculpins and kelpfish.

As the reef drops a bit deeper the rock walls are covered with fluffy, white Metridium anemones. These are sedentary creatures and must wait for currents to bring food to them. Thus, they only can be found on healthy, current swept reefs.

You can expect to see a lot of fish at Aumentos. Normally a large school of blue rockfish hovers off the reef, or circles the small pinnacle off the east side of the main reef. Blue rockfish are opportunistic feeders, and hope the currents bring them a few jellyfish or salps to dine upon. We also observed a large number of black rockfish hiding between the rocks along with a respectable number of gopher, black-and-yellow and brown rockfish.

On my last outing I noticed a large number of lingcod rested on the bottom waiting for an unsuspecting rockfish or octopus to wander too close. Lingcod make great photographic subjects because they believe they are invisible and tend to rest quietly when photographed. This is particularly true in winter when male lingcod guard their nest. It is unsportsmanlike to hunt nest-sitting fish, and in my opinion, to hunt on “named” reefs like Aumentos.

Aumentos is a great dive due to the opportunity to see and photograph a lot of different kinds of fish and invertebrates. California sea lions and harbor seals also hunt on this reef; so keep your eyes open for what might lurk around the next turn in the reef.

Access: Boats may be launched from the public ramps at Monterey Breakwater or between Fisherman’s Wharf and Wharf #2. Charter dive boats visit this site.

Hunting: Aumentos is part of the Pacific Grove Marine Gardens State Marine
Conservation Area, where only finfish may be taken.