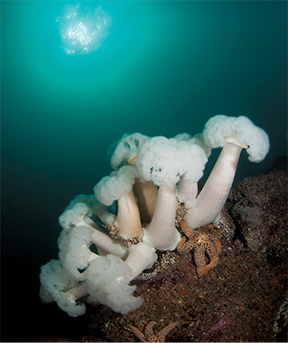 By Bruce WatkinsFebruary 27, 2019No Comments 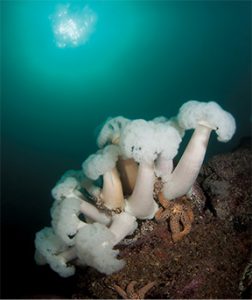 Hunting: None, this site is within the Lovers Point-Julia Platt State Marine Reserve.

Monterey Bay is home to a variety of interesting underwater habitats. Some areas are sandy, some rocky. Some areas have thick beds of giant and bull kelp, others have none. One rather unusual habitat is a rocky reef dominated by white-plumed anemones. These Metridium fields provide a unique habitat for photographers and sightseers. The site with some of the nicest vertical walls is called Metridium Mountain.

The Metridium Mountain pinnacle sits on a relatively flat 65-foot bottom. Vertical rock walls jut straight up from all sides to form a rock structure that is reminiscent of the photogenic buttes of the American Southwest. The top is mostly flat and the sides are scored with deep cracks and crevices. This is a relatively small site and you can easily swim around it several times during a single dive.

This site got its name for the pinnacle’s most conspicuous invertebrates — the white-plumed anemone or giant plumose anemone, although most divers use the scientific name. These huge anemones cover the entire top of the rock and the north and east sides. This is the West Coast’s largest anemone and can grow to around two feet tall and whose stalk can be as large as four or five inches thick. These Metridium have short fluffy tentacles that are nearly pure white, while their stalks are variable and can be white, cream, tan, brown, or orange. The small tentacles on the “fluffy” end of the anemone are used to feed on small plankton. They also have long, slender fighting tentacles used to repel other anemones. This anemone is extremely long lived, and one individual lived for nearly 100 years in an aquarium. Most anemones can reproduce sexually by releasing eggs and sperm into the water column, and asexually by budding or fission. Metridiums are one of the few anemones that only reproduce sexually.

Around the Metridiums we observed beds of red strawberry anemones and some very large giant acorn barnacles, the largest California barnacle. These feed by straining plankton from the water column by using specialized limbs called cirri. Some of the barnacles were free of marine growth; others were covered with strawberry anemones. There were also a large number of very fat rock scallops. They somehow seemed to know they were in a marine reserve and remained open as we photographed their colorful mantles. We saw a few nudibranchs on a recent dive.

The rock structure is highly textured by deep cracks and fissures. I suggest divers carry a light and peer back into the cracks to see what is lurking there. You may find a platoon of shrimp, maybe some crabs, certainly some small fish, and maybe an abalone or two. There may also be some rather large rockfish and colorful sea cucumbers. Divers should also take some time to peer out into the open water. This is a popular area for ocean sunfish to be found. These large pelagic fish feed on jellyfish in the open ocean but return to Monterey’s shallow reefs to be cleaned of parasites by señoritas and other reef fish. This used to happen very reliably in the fall of each year, but with climate change, we found lots of sunfish in January this year.

The bottom around the pinnacle is flat with a number of large boulders strewn about and is worth exploring. On a recent dive we encountered a very large number of large lingcod. During winter the male lingcod guard their nests, are reluctant to leave, and make great photographic subjects. We also found a fair number of kelp greenlings, but there were few rockfish out and about. Over the years many divers reported seeing wolf eels among the rocks surrounding the pinnacle, but they must have been well hidden on our recent dive.

This site is one of the calmest boat dives in Monterey and can be a comfortable experience for new divers even when the spring northwesterly winds are a blowin’. It is a great place to photograph Metridium anemones, and sometimes wolf eels.