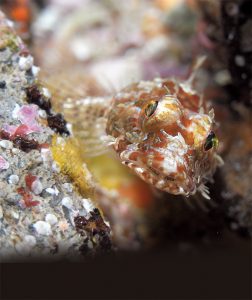 Currents are the lifeblood of any healthy reef system, especially in California. In a current, the leading edge of the reef is the most fascinating. There always seems to be a lot of fish life and the reef bustles with activity.

Three Fingers Reef is bathed in nutrient-rich currents, creating an underwater garden of color, life and activity. This spot is also frequently called 7-fathom or Tower Reef (named for the water tower on shore). No matter how you call it, it’s a beautiful dive. The name Three Fingers provides the best description of the geological structure, with long fingers spreading from three large rock wedges extending into the sea. This is a large reef area, covering roughly the area of three football fields, with the Three Fingers structure being of primary interest to divers. Three Fingers is the leading edge of an underwater feature known as Sea Cliff. Like Sea Cliff, the ocean side of the reef drops off steeply.

Surge and currents can be strong here, but there are a lot of channels and large crevices to duck into for cover. In the channels are ivory sand and jumbled boulders. Behind the ridges and channels, toward shore, is a flat rock reef that supports a healthy growth of kelp. The peaks of Three Fingers are about 45 feet down, but most of the diving is in the 60-to 70-foot range. On the outside it drops off quickly to 80 feet and beyond.

The current generally runs from north to south, making Three Fingers on the leading edge. And fish like this. Calico bass are especially abundant, many of good size. Its cousin, the barred sand bass, can be found hugging the bottom. Sheephead are also plentiful, but not many are large. Also present, but on the rather small size, are a variety of rockfish. Experienced freedivers may spot the shy white sea bass in the kelp. These fish are quite tasty but you need to be highly skilled, and stealthy, just to see one.

In the large gashes in the reef, rockfish hunker down out of the surge. Guitarfish, kind of a cross between a shark and a ray, can also be found here in the deeper crevices. Some are quite large, reaching up to five feet in length.

Small and medium-sized fish call the smaller crevices of Three Fingers home. Look for black perch, opaleye, silver perch, treefish, and a variety of gobies on the rocks.
This is a good spot for nudibranchs. The macro photographer will enjoy the variety, quantity and sizes. Other good macro material here includes corynactis and other anemones, gorgonian, shrimp and tiny crabs. But don’t be surprised if you find large crabs here as well as sheep crabs.

In spots, rock scallops are fair in numbers and large. Lobster hunters will see a moderate amount of bugs, but many are just a little too short.
Because of the currents, visibility is generally good at this location. The exception is during the occasional strong plankton blooms in the late spring and early summer. During a strong plankton boom that clouds the water, head deeper where the colder waters beneath the thermocline will be clearer but dark. For water clarity the best time to dive here is late summer through early winter.

Although it comes and goes the kelp here is usually very thick and healthy.
The kelp forest off Point Loma is one of the most extensive in the entire state. In addition there are a multitude of dive sites in which to explore. Some of them include Sea Cliff, New Hope Road and Train Wheels all with varying degrees of current issues and expertise levels.

Currents can be a blessing and a curse when it comes to diving. Get a rough estimate of the current’s velocity by studying the kelp. If it is laying down in the current, and whipping in the water movement, you might want to think about diving a different, more protected site.
But more often than not, when currents are moderate, they can add an exciting element to diving when marine life is especially active. Just make sure you use proper current diving techniques such as starting your dive up current and using a trailing current line off the back of the boat should you surface down current and need a little help returning to the boat.

At-A-Glance
Skill Level: Intermediate depending on depth and current experience.
Location: North end of the Point Loma kelp beds. Look for fence line and green water tower ashore.
Access: Boat only. Can be done with a kayak but is a long paddle.
Entry and Exit: Water entry off the boat is usually not too tough. Watch out for thick kelp.
Depth Range: 45 to 90 feet and beyond.
Conditions: Fair. Currents and upwelling can sometimes make it challenging.
Visibility: Variable but generally fair to good. Best late summer through early winter when it averages 20 to 30 feet.
Photography: Good for macro and wide-angle
Hunting: A few lobster and rock scallops. Fair spearfishing for the average diver. Good for the more skilled free diver.
Cautions: Currents. Stay within or near the kelp forest to avoid the moderate boat traffic.