I was amazed. I could see all the way through the reef to my buddy on the other side, some 40 feet away. On my previous dives on New Hope Rock, I had seen many caves, but I never realized they passed all the way through the reef as small tunnels. Clearer waters put this reef in a new perspective. New Hope Rock is a labyrinth of caves, rock arches, and tunnels, full of marine life.

This is one of my favorite dives when visiting the San Diego area. The kelp off Point Loma is usually extensive, healthy, and abundant with marine life. New Hope Rock is at the heart of this marine community.

Much of the bottom off Point Loma is rocky substrate to which the kelp forest attaches. Here and there are rock piles and ledges. One of the most substantial natural reef structures is New Hope Rock. About the size of a house, the massive structure rises 20 feet from the bottom 50 feet down. There are huge crevices, small walls, and splinter reefs to explore. Another large boulder lies just to the north. Cut into the sandstone edifice are caves and tunnels.

Rockfish, sheephead and opaleye find refuge in and around the rock. Attached to the vertical faces and the walls of the tunnels are stands of gorgonian and large gray moon sponges. They feed on the tiny bits of plankton pushed in by the surge. Giant-spine seastars are particularly abundant. Numerous anemones and nudibranchs add dramatic sparks of color. The varied rock face offers both macro and wide-angle photo opportunities. 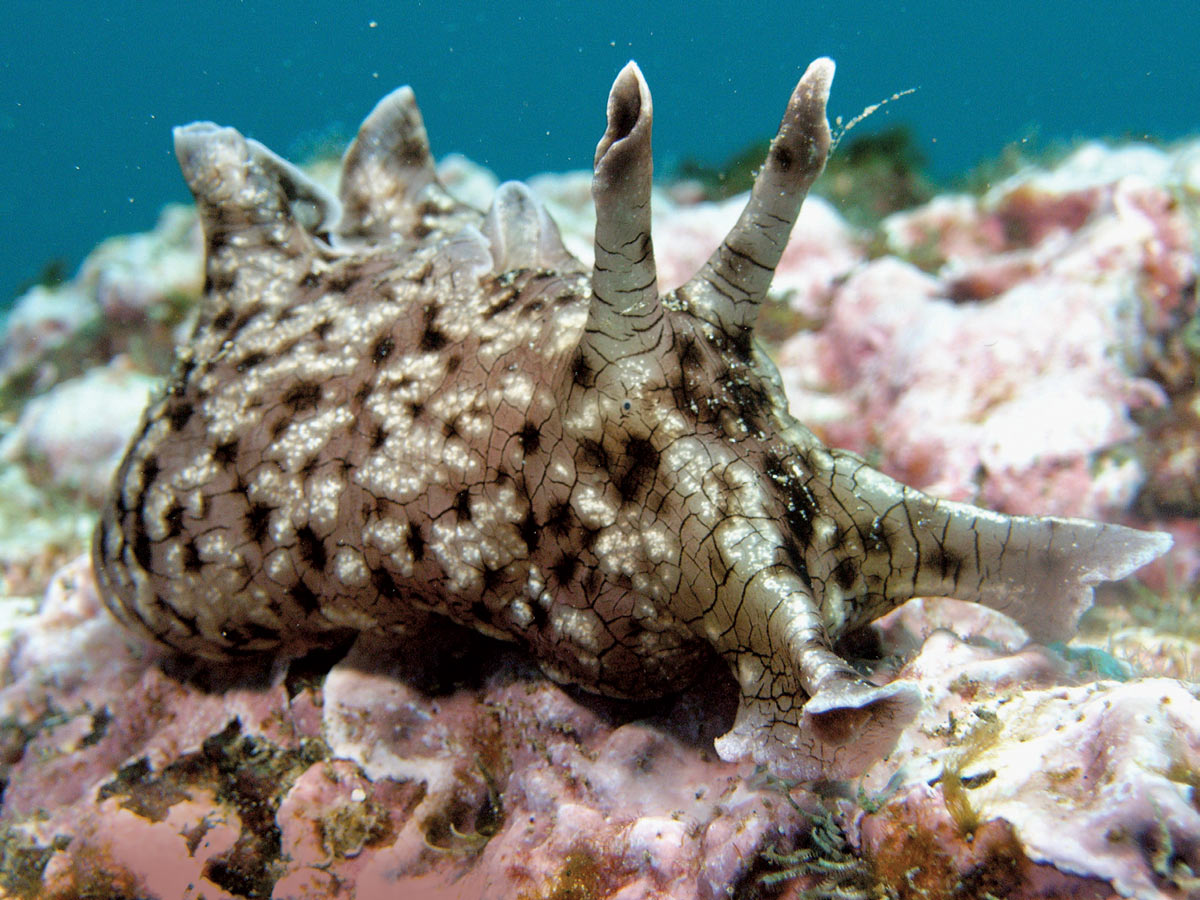 The sea hare is named for its slight resemblance to a rabbit.

Because the rock lies deep within the kelp forest, conditions are generally good. The outer kelp attenuates much of the swell and currents. Visibility averages 20 to 30 feet, but days of 50 feet are not unusual. The surrounding kelp is often quite thick, but the vertical rock faces of the reef itself do not lend themselves to kelp attachment. Even so, use proper kelp diving techniques and allow enough air to return to the boat under the canopy on completion of the dive. Also, carry a dive knife and cutting shears, just in case of entanglement.

On the surrounding flat bottom, it’s not unusual to see halibut, bat rays and guitarfish. Giant black sea bass sometimes lounge in the kelp above the reefs. Look in the deep crevices at the base of the reef for large horn and swell sharks. They patrol the kelp at night but seek refuge here in the daytime.

Speaking of night, this is an excellent place for a night dive. Shy animals hidden in the reef during the day come out to feed under the cover of darkness. Look for tiny shrimp and an occasional lobster. The large rock gives you a lot to explore on one night dive and is also an easy reference point for navigation.

New Hope Rock and the entire Point Loma kelp forest is easily reached by private boat launched from either Mission Bay just to the north, or San Diego Harbor to the south. New Hope Rock is one half-mile offshore; there is no beach access (military site), so this is a boat dive only. It is a short enough run to reach the rock by properly equipped and skippered inflatable boat on a calm day but is a bit too far out for most kayakers. I prefer using one of the excellent dive charter boats running out of Mission Bay. They take care of all your needs. All the boats operating from Mission Bay provide tanks and weights. A trip to Point Loma is often combined with diving at San Diego’s famous Wreck Alley. A dive on the Yukon wreck and New Hope Rock is one of the best half-day combos along the coast.