Bluefish Cove, located within Point Lobos State Park, is one of the diving gems of the Monterey Bay region. It’s also a bit challenging to reach since it’s a rather long surface swim from Whaler’s Cove. Diving Bluefish Cove takes some planning, preparation, dusting off some diving skills, and potentially learning some new skills. The planning aspect of the dive starts days or weeks ahead of time and consists of making reservations to dive at Point Lobos State Park. Diving at Point Lobos is a highly regulated activity; there are daily limits regarding the total number of divers, fees to be paid, no solo diving, and you will be asked to show your diving certification card when entering the park. The full set of rules can be seen at the link provided above. Once the planning phase is complete and the reservations have been made, the preparation phase can begin. One solution to the long surface swim is to make use of a kayak. The key features of a kayak that can be used for diving are straps for all your gear, enough buoyancy to float you and all your gear, tie-downs that can be used to attach ropes, and a scuba tank well molded into the kayak body. In my opinion the best model for diving is the sit-atop Ocean Kayak. One new piece of equipment that you will need is something that can be used to secure the kayak while you are diving. This could be an anchor or kelp clip. Kelp clips can be purchased or can be made from rope and recycled battery jumper cable clamps.

The certification skills that you may have to refresh are related to gearing up and removing your dive gear while in the water. The recommended sequence is to secure your kayak, put on your fins, inflate your buoyancy compensator (BC), lower your tank/BC unit into the water, lower yourself into the water, don your BC, attach your weight belt (if weights not integrated), perform your buddy check, put on your mask, make note of where you parked the kayak, set a compass heading, and dive. Good navigation skills are important when kayak diving.

I recommend arriving at the front gates of Point Lobos State Park when they open at 8 am the day of your dive to get a parking spot at Whaler’s Cove. Make sure to coordinate with your dive buddy to arrive at the same time so you can check in together as a dive team. Be prepared to show your dive certification card at the front gate when entering the park. If your certification card does not have your photo you may need to show photo identification as well. When you arrive at Whaler’s Cove make note of the conditions. If the swell is up there may be waves breaking in the channel between Whaler’s Cove and Bluefish Cove. The channel is defined by Cannery Point, near shore and Bird Rocks, away from shore. If the conditions look questionable scrap the idea of kayak diving Bluefish Cove and stay within the protection of Whaler’s Cove. If you have decided to kayak dive, assemble your tank, regulator, and BC, and strap the assembly to the kayak, then attach all the other gear (fins, mask, hood, gloves, camera, kelp clip, weights, etc.). Try to balance the weight (tank on back, weights up front) in the kayak. Now put on your wet/dry suit and shove off. Ocean entry and exit at Whaler’s Cove is only allowed via the paved boat ramp connected to the parking lot. As you are paddling out of Whaler’s Cove you will see Cannery Point on your left and there will be a channel between the point and Bird Rocks. The channel is the entrance to Bluefish Cove. The structure within the cove is very diverse. 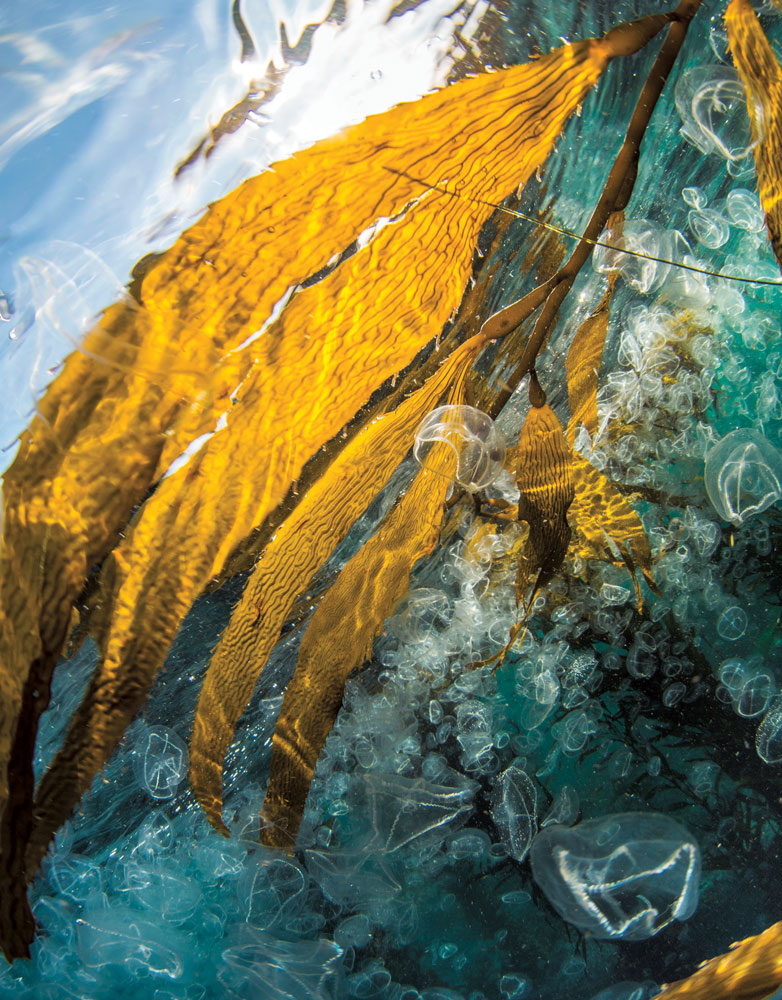 Sometimes the jellyfish are so thick it seems like you are diving in ice water. Photo by Bruce Sudweeks.

The dive site consists of multi-colored rock pinnacles and walls covered in hydrocorals, strawberry anemones, and sponges. The bottom depth varies from 40 feet to over 100 feet. The Carmel Trench comes quite close to Bluefish Cove so large animal sightings are common. The dive site has a good mix of small creatures like nudibranchs, and large animals such as sea lions, rays and sharks.

Bluefish does not get a lot of divers and hunting is prohibited, so the sea life is plentiful and not accustomed to visitors. The purple urchin invasion has not hit Bluefish and Whaler’s Coves as bad as some of the other areas in the Monterey Bay Area so there is some kelp remaining.

After diving Bluefish Cove you are likely to get back on the internet as soon as you get home and reserve your next Point Lobos diving adventure.