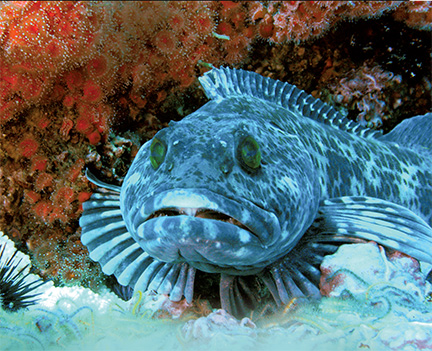 Skill Level: Beginner to intermediate but experience with currents is a must.

Location: Seaward side (south) of the extreme west end of West Anacapa Island

Entry and Exit: Dependent on local weather, swells and currents.

Conditions: Variable. Exposed to the open sea. Conditions can sometimes be challenging.

Photography: Good wide-angle around ledges and very good for macro with many small fish

Hunting: Poor. Remember the north side of the point is a preserve.

As we were anchoring off the far west end of Anacapa, I half-jokingly pointed down toward the water and said, “And this is where I will find a lingcod.” Checking my log it seems I have encountered what appeared to be the same lingcod in the same spot the last six times I have dived here. We were developing a close personal relationship. It was small and scrawny but with a big gnarly mouth full of teeth.

I descended and headed over to the general area where I had seen this ling on several previous dive outings. Low and behold, there it was! I must say I was impressed by my own prognostication. “Hello, old friend,” I said. “Pose for some photos?”

The lingcod obliged. After firing off several shots, I backed up to fiddle with my camera settings. The ling moved just enough for me to see it had a “nest” of eggs. Only males guard the eggs. This is how my lingcod friend came to be named Larry.

Do not shoot Larry. For one, he’s way too small. Secondly, it is unsportsmanlike to shoot any animal that is guarding a nest, because predators will move in and devour all the eggs.

There are very few scallops here, and nothing worth spearing. I have seen other lingcod but they are always scrawny and too small to meet the minimum legal size. By the way, lingcod are not cod, and even though they appear eel-like, they’re not eels. The lingcod is in the greenling family and is a relative of the rockfish and scorpionfish.

I never considered this site a good lobster spot, but another diver on the same dive headed west and deeper and came up with two good-sized lobsters. Keep in mind we’re talking about the south side of the island. The north side of the west end (Rat Rock) is a preserve and nothing can be taken.

While diving here a few years ago we were moving through the deeper portions at about 80 feet where the rocks meet the sand and in the distance I saw a gigantic dark form pulsing in the distance. It turned out to be a massive school of squid moving in unison. Truly a rare and interesting sighting.

As for diving conditions, swift currents are the norm here. Your biggest problem is when they flow from east to west, head out past the tip of the island, swirl and then move out into the wide open water channel between Anacapa and Santa Cruz Island. Obviously, this is a bad thing. Given that there is little to no kelp in this dive site it can sometimes be difficult to determine the direction of the current so you’ll need to be extra cautious. Consider using a current line/float and always have surface signaling devices (an inflatable safety sausage, an audible alarm such as a Dive Alert™ and a (GPS radio) Nautilus Lifeline).

Water clarity is very good averaging 40 to 50 feet unless there’s a plankton bloom, which is common.

The reef drops off at a moderate pace in a succession of ledges and steps. Inside the cracks you will find shiny brown chestnut cowries, many giant keyhole limpets and California cone snails. There is some color provided by huge mats of brittle stars, blood stars, patches of corynactis anemones, a few nudibranchs and small “bushes” of golden, red and purple gorgonian. Otherwise it is not a particularly colorful reef. What makes it interesting is the variety and high level of marine activity.

Several dive charter boats routinely visit this site, running out of Santa Barbara and Ventura. Usually they will set up dual anchors, making diving here even easier. In addition there are small boat launch ramps in Santa Barbara, Ventura, and Oxnard for private boats.

And if you see Larry, salute him for me and wish him luck with his new family.