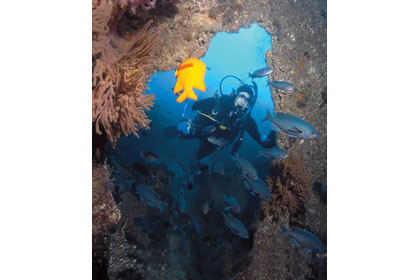 Many divers have an affinity for shipwrecks. We seem to be drawn to examples of how man tries to tame the ocean with our so-called superior intellect and crafty hands only to find those creations dashed and sent to a watery grave. Through the power of the sea, and man’s folly, we divers often benefit with fun dive sites.

The problem we often run into is that these hulks are often difficult to reach, either through horizontal distance from shore or vertically in terms of depth. But there are exceptions. Perhaps the best is the easily accessible wreck of the sailboat SueJac.
Thousands of divers each year visit the popular Avalon Underwater Park off Casino Point at Catalina Island, which is a popular scuba-training site. After completing their scuba skills, they venture around the reefs a bit but rarely travel far from the entry area.
There is, however, a corner of the park that holds the gem that is the wreck of the SueJac. Although there are a lot of “wrecks” in the park, this is the only that ended up here accidentally through the forces of nature.
While the mainland side of Catalina Island is calm most of the time, there are times when the weather can turn nasty. This usually occurs when strong offshore or “Santa Ana” winds occur. These winds blow from the mainland toward the normally calm side of the island at up to 60 miles per hour. Such a condition occurred on November 14, 1980, causing the 54-foot sailboat to break anchor and head for the breakwater at Casino Point. The rocks tore into the hull on the port side sending her to the bottom. The wreck settled just outside the eastern boundaries of the Avalon Underwater Park. Diving pioneer and local Avalon resident Jon Hardy arranged to have the boundaries moved so that they included the wreck. In 1999 concrete stairs were added to the underwater park for easier access to the water, making the SueJac the most accessible true wreck in California.
The wood deck portions of the wreck have long since rotted away but most of the ferro cement hull structure remains. She sits bow down with port side upward almost as if proud to display the wounds that sent her to the bottom. There are two large holes; both large enough to easily swim through. There are some much smaller holes on the stern that probably once held portholes. The bow is 90 feet down with the stern at about 60.
The wide-angle photo ops here are terrific. Get your dive buddy involved and take turns posing framed by the jagged holes. Get a bright colored garibaldi or sheephead involved along with resident gorgonian sea fans for further decoration. Properly lighted you’ll have a great shot.
There are some other great photo subjects here. At the bow and in the wreckage inside the hull it is not unusual to see a moray or lobster. Sheephead are especially friendly within this park, seemingly enjoying their protected status in the no-take preserve. And speckling the hull and nearby reef for you macro photographers are a variety of nudibranchs and numerous brightly colored blue-banded gobies.
Locating the Suejac underwater is easy. The bow lies just inside the outermost large buoy at the east end of the park. Most divers wishing to explore the wreck swim partially on the surface toward the buoy to first clear themselves from the multitude of student divers below. Note a compass heading and then when comfortable head for the bottom. You don’t need to follow the compass heading precisely but rather just follow the 70-foot profile in the proper general direction and you’ll run right into it. Kelp sometimes obscures the wreck from a distance but this last year the kelp growth has been very sparse due to warm water temperatures.
The Avalon Underwater Park deserves at least two dives just to get the “lay of the land” and after that several more to get to appreciate all it has to offer. The Suejac is just one corner of this wonderful park that you need to see and explore.
At-A-Glance
Location: At the eastern boundary of the Avalon Underwater Park on Casino Point on the west side of Avalon Bay.
Getting there: Catalina Express departing from San Pedro, Long Beach and Dana Point  (catalinaexpress.com). Catalina Flyer from Newport Beach (catalinainfo.com)
Access: A short walk from ferry dock to the other side of the Avalon Harbor. Steps lead to the water.
Skill level: Intermediate
Depths: 60 to 90 feet.
Visibility: Very good, averaging 50 feet+.
Facilities: Full gear rentals and air fills available. Restroom facilities, food, and accommodations are located nearby.
Photography: Excellent wide-angle around the wreck holes. Fair macro.
Hunting: None allowed. Park is a preserve.
Hazards: Boat traffic outside the park boundaries. Occasional currents.
← Previous Post
Next Post →