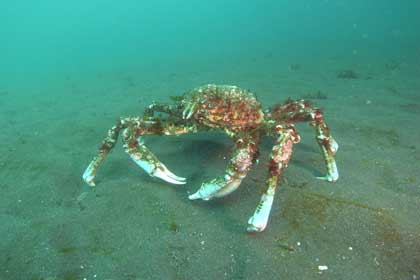 As we prepared for our dive, dolphins swam a mere 50 yards from shore. This was good sign, indicating the likelihood of good fish life. Or perhaps the dolphins were paying tribute to their ancestors that entertained humans on shore many years ago. Old-timers still refer to this dive site as “Old Marineland.” Marineland was one of the oldest theme parks in America when it closed in 1987. Park guests were awed with a variety of sea life exhibits, and, of course, dancing dolphins. Even after the park’s closure, divers usually had access to the shoreline for exploring the wonderful kelp forests nearby. There is now a beautiful and expansive luxury resort here, Terranea. And fortunate for us, they have not forgotten about providing easy access to the public and divers.

The Terranea Resort is the crown jewel of the Palos Verdes Peninsula’s landscape that includes the Trump Golf Course and multi-million dollar ocean view homes. Even so, while the water clarity around peninsula is usually not comparable, the marine life here can often offer a better variety in a larger abundance than nearby Catalina Island.
Entries and exits can be a little tricky, as the “beach” is made up of large, slippery rocks. Getting in and out is a bit easier during high tide. I find the best way to get in is to put your fins on at the water’s edge and, while holding your mask and regulator in place, scoot up into the surf. As a wave rushes in, turn onto your belly and as the wave retreats it will take you out where you can fin-kick to deeper water.
There are two kelp forest diving options, to the right heading toward Long Point and around the corner to the left. Having dived beautiful Long Point numerous times, we chose to head left where the dolphins had been frolicking. You could see that just on the other side of the rocky point there was an extensive kelp forest that began only 50 yards offshore and extended over 300 yards out. Taking a compass heading we dropped into 25 feet of water and headed out, skirting along the reef’s edge as it gently sloped heading out to sea.
The entire area is part of two different conservation areas. To the east nothing may be taken. In front of the cove and to the west only white sea bass and Pacific bonita may be taken.
At a depth of about 35 feet the reef breaks into large sections, creating interesting peaks and valleys to explore as you make your way out to a depth of about 50 feet, some 300 yards from shore. It was fun swimming through the labyrinth. On the rocks were an exceptionally large variety of nudibranchs including big Spanish shawls, hefty yellow dorids, and brightly colored chromodorids. Other invertebrates included lots of bat stars, octopus and sunstars (unusual for this far south).
Reef fish here include the ubiquitous bright orange garibaldi, and small schools of opaleye and black surf perch. Venturing into the sand flats away from the reef is certainly worthwhile, as you might spot a large bat ray or even an electric torpedo ray. The torpedo ray has no fear of divers. Stay clear as they can pack a wallop jolt of electricity.
When heading back to shore, make sure you are clear of the forest before ascending, as it can be quite thick close in, and use caution when exiting over the slipper rocks.
The trail to the cove is moderate but long. It is slightly shorter if you take the steps along the way. A wagon or other wheeled cart can be used for the winding trail.
While there is a fair amount of public parking spaces at the top of the hill it can fill quickly on weekends. Arrive early. You are allowed to unload just a little farther down the road but unless you are a resort guest you’ll have to park in the parking area. The parking is paved, as is much of the trail. Just up from the cove is a public shower and restrooms near a snack bar that is open seasonally. At the bottom of the hill just a few feet up from the cove’s stone beach is a sand area to prepare for diving activities.
Once you are done with your dive and cleaned up you might want to visit the posh resort. The views, especially on a clear day, are spectacular. Hungry? Try the burger at Nelson’s restaurant named in honor of the main character Mike Nelson of Sea Hunt fame.
At-A-Glance
Location: 6610 Palos Verdes Drive South, Rancho Palos Verdes. Call (310) 265-2800 for resort information.
Access and entry: Long but easy walk to water’s edge. Use of a cart is possible to sand area close to water. Walk along path can be shortened by using stairs. Water entry can be difficult across large coble rock beach.
Skill level: All with proper surf entry and exit training and experience.
Depths: 15 to 50 feet.
Visibility: Fair to good. Averages 15-20 feet or better.
Snorkeling: Good on shallow reefs when calm.
Photography: Good macro with a fair amount of subject material. Fair wide-angle in kelp and with fish, divers, and animals in kelp. Surf entry and exits are challenging with camera.
Hunting: The entire area is part of two different conservation areas. To the east nothing may be taken. In front of the cove and to the west only white sea bass and Pacific bonita may be taken. For specifics see  http://www.dfg.ca.gov/m/MPA/SelectCounty
Facilities: Excellent with restroom and shower. Restaurant nearby at resort.
Conditions: www.surf-forecast.com. Search LA County and select Abalone Cove, which is nearby.
← Previous Post
Next Post →