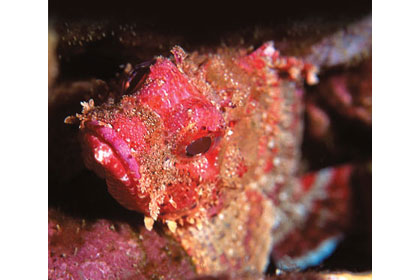 While the entire east side of the Monterey Peninsula is one continuous dive site, experienced captains know that some anchorages offer much better diving than others. That is, after all, one of the great reasons to sign onto a charter boat instead of beach diving or futzing with your own boat.

Inner Chase Reef begins between 200 and 300 yards offshore and to the north from the Coral Street Beach. The reef runs parallel to shore and consists of a series of rocky ledges and pinnacles that drop from 20 feet to a sand bottom in 50-60 feet of water. While diving along the entire reef is quite good, the most northerly tip, called Chase Point, offers, arguably, the best dive. The reef is named in honor of philanthropists Lucie and Henry Chase, who settled in Pacific Grove in the early 1900s. At Chase Point the reef slowly necks to a point at the north end. This area has a higher relief than most of the rest of reef. A series of rocky mini-pinnacles jut up vertically from the sand bottom to create a rocky ridge. The rock is not in one piece and consists of a series of large bumps with smaller bumps on top, resembling a dragon’s back. Alongside the big rocks are clustered smaller spires. Some of these are very close to the main rock and create deep crevices that make perfect hiding spots for a variety of marine creatures. Some crevices are wide enough that a diver may pass through. The rocky reef supports a healthy, and sometimes thick, bed of giant kelp.
This area has quite a lot of fish life, but not an abundance of game fish. Schools of blue rockfish meander along the outside and within the thick kelp bed. These are typically not very large, but make good photo opportunities. Smaller reef fish are common along the rocks. Here you’ll find many kelp and painted greenlings, sculpins, and black-eyed gobies.
Those who patiently search the rocky surfaces and crevices will be rewarded with sightings of a great many colorful invertebrates. There are quite a few dorid nudibranchs here, including yellow-colored species, the white-ringed dorid and snow white Odhner’s dorid. There are also a great many shelled mollusks here, including Ida’s miter, the leafy hornmouth, and the California cone.
Even though the rocky mini-pinnacles hold most of the marine life, plan to spend a bit of time exploring the sand area adjacent to the rocks. Here you’ll likely find moon snails, sand dabs, starry flounder and turbots.
This area is a great spot to dive with harbor seals. These marine mammals are very curious and will often approach divers. If you want to get very close to harbor seals, simply carry, but do not use, a spear gun. These intelligent mammals have learned that it is easier to pull a fish off a spear, than to catch one on their own. They will follow you on your entire dive hoping you will catch them dinner.
Chase Point makes a great second dive of the day. It is shallower than the offshore sites, and yet has enough marine life to engage the most experienced diver. Athletic divers may reach this site via a long swim from the beach, but almost all diving here is done from a boat. Most of the Monterey Charter Boats know this site and will be happy to take you there. It often makes an excellent dive when the winter storms keep the boats from making the trek south to Carmel Bay.
The author wishes to thank Captain MaryJo Nelson and the crew of the Beachhopper II for their help in the preparation of this article.
At-A-Glance
Location: At the northerly tip of the inshore reef along the northern end of the Monterey Peninsula. Those with GPS may find it at 36°38.331′ N, 121°55.568′ W.
Access and Facilities: Boat dive. Private boats may be launched from the public ramps Monterey Breakwater or between Fisherman’s Wharf and Wharf #2.
Depth: 20 to 40 feet.
Visibility: 10 to 40 feet
Skill Level: All levels.
Hunting: This site is within the Pacific Grove Marine Gardens State Marine Conservation Area. Take of invertebrates is prohibited. Spearfishing is permitted, but discouraged.
Photography: Great macro photography even on days when the visibility to poor. Great wide-angle photography of reef scenes when the visibility is better.
Hazards: Watch for thick kelp, surge,
and boat traffic.
← Previous Post
Next Post →