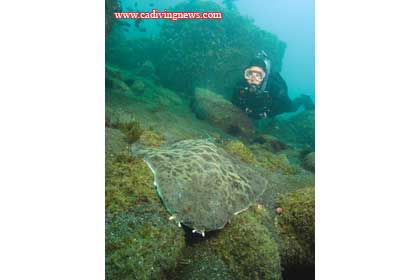 I’m sure all of you remember the famous Jim Henson of Muppets fame (Sesame Street). Do you remember his children’s show know as “Fraggle Rock”? It lasted for about five years in the 1980s and featured a large cast of characters in a variety of shapes, sizes, personalities, and colors, all living in the same community. Not only was the show entertaining for children but adults loved it as well (this one included). It is no wonder I was immediately attracted to this dive site on hearing its name. And true to its name the reefs and kelp forest at Fraggle Rock is populated by a huge variety of fascinating critters, big and small, colorful and curious.

Let’s start with the big. On a recent dive several divers reported seeing angel sharks. Angel sharks vary in size from three to five feet long. Looking like a combination of a ray and flat shark, you often have to look closely to see them buried in the sand but sometimes they are out the open. They can usually be approached very close, but resist the urge to touch them. They are remarkably agile and can turn quickly and inflict a painful bite.
Also frequently buried in the sand here are large halibut. They spook much easier than angel sharks, so approach very slowly and without jerky movements. If you are spear hunting this popular quarry, estimate the size and shoot quickly because you will likely only have a second or two to react. There are minimum size restrictions and limits, so know the fish and game regulations before descending with a spear.
Don’t mistake a torpedo ray for a halibut with your spear! They are also a sand dweller here and also often buried in the sand. Aggravated or annoyed, they can pack a powerful electric shock. Unafraid of divers, sometimes you’ll find them free swimming and then you can have a great photo opportunity. Just don’t get too close!
In the shallows large leopard sharks cruise in mating behaviors during the summer. If you are looking, you may have to move up into as shallow as five feet of water.
Then the biggest of the big that sometimes visits this area is the giant black sea bass. Looking much like huge dark gray blimps, search for them in the outer kelp, usually in 30 to 40 feet of water during the late spring and early summer.
The smaller more colorful creatures include thousands blue-banded gobies. Only one to two inches long, their bright red-orange with iridescent blue stripes cannot be missed. They beg to be photographed but can be difficult to approach.
Also in the brightly colored category is the much larger and more conspicuous garibaldi. Prolific and friendly, this stunning orange fish, so common to Southern California (especially Catalina), is our official California State Marine Fish. The ubiquitous garibaldi gains its name from the flamboyant 19th century Italian General Giuseppe Garibaldi who would wear bright orange shirts and vests into battle.
Want to have some fun with the garibaldi? Take an orange glove with you underwater and flip it around in front of the garibaldi. Being intensely territorial, the fish will confront the perceived intruder. Or snap your fingers at them. This imitates the popping in the throat they make at each other in confrontations. Breeding season for the garibaldi begins in spring. To prepare, the male garibaldi creates a nest of red algae. Placing a small object in the nest can have more fun with garibaldi and watch the male promptly move it far away. Once the nest is created the female comes to lay her eggs. After fertilizing the eggs, the male, without help from the female, then guards the nest voraciously.
Another fun fish here is the sheephead. Unlike much of this part of the island, there are a fair amount of good sized males. The small juveniles seen on the reefs are bright orange-pink with a white lateral line strip and black spots on its fins. As they mature the color becomes an overall pink.  All sheephead begin their lives as females! Maturing, the fish then enters the terminal phase where it becomes a male distinguished by its large head, square jaw, big teeth and three color pattern — white chin, black head and tail and pink mid-body. The sheephead can be fun to attract by the rubbing and banging of rocks together.
Invertebrates here include mantis shrimp in holes out on the sand, pink abalone, and some lobster on the outer reef.
The reef structure at Fraggle Rock is also quite interesting. There is an inner and an outer reef separated by about 150 feet. Both are covered with healthy kelp that is infiltrated with schools of fish. The inner reef depths run 10 to 40 feet with the outer at 45 to 65 feet. Both have interesting profiles, but the outer reef has 15-foot high pinnacles, big overhangs, large ledges, deep crevices and even a small swim-through.
Fraggle Rock itself is actually the extra-large boulder in the surf zone on shore. The reefs cover a fairly large area the edges of which are clearly seen from the borders of the kelp forest that encompasses several acres.
Fraggle Rock is not marked on charts and is not a particularly well-known dive site and is less frequently visited by dive boats. I am not sure why. The prolific critters here call you to visit. Jim Henson would have been proud and felt right at home here.
Location: East of the Rock Quarry. GPS: N33°26.058′, W118°27.211
Access: Boat only
Skill level: All
Snorkeling: Good in the shallows
Depths: 10 to 65 feet
Visibility: Good averaging 40 feet
Hunting: Fair for lobster (in season). Some spearfishing opportunities but most fish are too small.
Photography: Excellent critter photography with a lot of subjects both wide-angle for the bigger guys and macro for the small ones.
Suggested Dive Charter Boats Frequently Serving This Area:
Sand Dollar – (877) 444-BOAT
Sundiver/Sundiver Express – (800) 555-9446
Scuba Cat – (310) 510-0330
or see the California Scuba Calendar section of this issue for trips to Catalina Island
← Previous Post
Next Post →