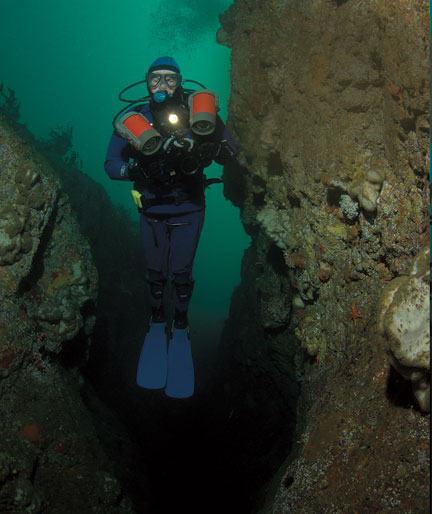 I am constantly amazed by how many individual dive sites exist within the Monterey and Carmel Bays — and just how different these nearby sites can be from each other. One could guess that sites close to one another experience nearly the same ocean conditions and would have similar geographic features and marine life, but this is often not the case. Take for example Humpback Pinnacle off of Cypress Point. This site was named “humpback” because on bathometry charts the reef looks like the arched back of a humpback whale. Nearby Local’s Ledge has a topography more like the American Southwest with flat-topped mesas cut by steep-sided canyons and Black Dog Ridge looks more like a rocky extension from the shore.

The Humpback Pinnacle was first “discovered” by Chuck Tribolet and his buddies some time ago, but I suspect he was not the first to dive here. Some divers call this site Fanshell Pinnacle due to its proximity to Fanshell Beach, which is just north of Cypress Point.

Humpback Pinnacle juts up sharply from the 100 to 105-foot bottom on the east and west sides. It tops out at about 45 feet in a rounded spire and then drops off to the north in a series of spires, ridges and valleys. To the south the pinnacle drops off more gradually giving the appearance of a humped back. The tops of the spires have a thin veil of palm kelp and the rocky surface is covered with encrusting invertebrates.

Beneath the palm kelp are large carpets of bright red strawberry anemones. These tend to overgrow the many, giant acorn barnacles. The vertical surfaces of the walls are home to a few, but quite large, giant plume anemones. There is also a good variety of shelled mollusks, hermit crabs and colorful sponges on the rocky walls. This is a great site to find gaudy and unusual nudibranchs like Dendronotus.

There are a fair number of giant spined stars and bat stars here. In recent years a viral infection took out many of the resident sea stars and it is good to see that they have begun to recover. This recovery has not been uniform. Some sites, fortunately not this one, have been slower to recover and this has allowed the sea urchin population to expand. Sea stars, particularly sun stars and to a lesser extent bat stars, are one of the principal predators of urchins and the reduction in the sea star population has permitted the urchins to outcompete many of the other invertebrates. I suspect that in Monterey, at least, sea otters also consume their fair share of urchins.

Divers can expect to find several large lingcod sulking among the stalks of palm kelp, a few gopher rockfish hiding in cracks and a good-sized school of blue rockfish milling about in shallow water on the south side of the main spire.

There is a cave that begins at the top and near the middle of Humpback Pinnacle. Look for the entrance a bit east of the shallow spire. The cave is shaped like a giant chimney or smoke stack — its main body is nearly vertical and open at the top and it has a floor with a horizontal exit at the bottom. The shallow end is about 75 feet deep has a large bowl with a deep undercut. If you ever wondered what it’s like for Santa Claus to drop down a chimney you should swim through this cave. There were no cookies and milk waiting for us this day but the bowl is home to a few resident starry rockfish. These are very rare at inshore California dive sites but predictably found here. The cave walls are relatively free of color and invertebrate growth and are mostly covered by bryozoans and tubeworms.

The area around Cypress Point has numerous anchorages and dive sites within a relatively small area. There is a similarly shaped pinnacle about 200 feet directly to the west of Humpback and another one about 400 feet to the north. The topography and marine life are similar except the only cave is found at Humpback.

Cypress Point is naked to the wind and swell from any direction and may only be dived on the calmest of days. If you choose your days wisely any of the Cypress Point anchorages make for a great dive but Humpback has some of the more unique bottom topography.

Skill Level: Intermediate or better due to the ability to get fairly deep.

Photography: Great opportunities for both wide-angle and macro photography, especially for reef scenes and nudibranchs.

Hunting: This site is outside of Marine Protected Areas and hunting is permitted. However, since this is such a pristine site, I suggest hunting elsewhere.

Cautions: Watch for big swell and currents. Due to the depth, divers should keep an eye on their dive computers.